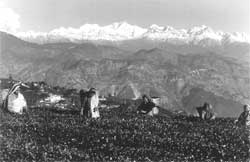 market forces, rather than ecological concern, have prompted some of the owners of the Darjeeling tea gardens to turn bio-organic. Germany, which is the largest buyer of Darjeeling tea, threatened to discontinue buying tea as they felt that the pesticide residual content in the tea produced in Darjeeling is above the prescribed standards. In response, about 25 per cent of the tea estates have started using manure fertilisers and neem-based pesticides as alternatives, according to Ranin Dutta, secretary, Darjeeling Planters Association ( dpa ).

Darjeeling tea is famous for its innate aromatic quality, colour and briskness (sharp taste). Tea-makers attribute these qualities to the peculiar geographic conditions in which the Darjeeling tea is grown. Says Dutta, "It is the combination of the soil, rainfall and altitude of this region, which gives the tea the distinct flavour". About 76 gardens in Darjeeling produce about 9-10 million kg of tea every year, of which 80 per cent is exported.

"Earlier, our main market was the Soviet Union, who never had any complaints. But with the break-up of the Soviet Union, we had to turn to European countries, "says J P Gurung, president of the dpa and general manager, Warren Tea Industries. Germans have been very particular about the pesticide residue and have threatened to stop buying our tea, he says. The problem has been caused by tetradifon, a pesticide used to fight the spider mites larvae. In a test conducted on one particular batch of tea, one kg of tea contained about 240 micrograms of tetradifon -- 24 times above the acceptable limit of 10 micrograms.

However, other tea managers attribute the German fuss to market lobbying. Ajay Rathore, manager of Tamsung Tea Estate -- which also has turned bio-organic -- says that the pesticide propaganda was initiated by the coffee and cocoa producing countries, who wanted to cut into Indian tea exports.

The use of fertilisers and pesticides in the tea estates has increased manifold of late. Explains Mahender P Lama of Jawaharlal Nehru University ( jnu) , New Delhi, who has studied the Darjeeling ecology: "The tea bushes in Darjeeling are almost 100 years old. At this age, the production is very less. Therefore, maximisation of production to maintain the profit line is done through abundant use of fertilisers and pesticides."

"Planting of new bushes is a very costly procedure," Lama says. "It takes nine years for a tea bush to fully mature in Darjeeling whereas in Assam it takes only about four years." This is a major hindrance and the tea estate shy away from planting new bushes. Moreover, uprooting of old bushes leads to soil erosion, therefore it is a precarious task." However, Gurung counters this theory. He says that its not the age of the bush that determines the chemical inputs, but the higher rates of run-off, that washes off nutrients from the top soil. He links it with the deforestation in the hills. Companies such as Goodricke and the Lohia Group of Companies set aside two to three per cent of their land every year for fresh plantations, requiring less chemicals. Tea managers feel that another reason for the high chemical input has been the lack of fuel in the area. The plantation labourers remove the pruning litter to meet their fuel needs, depriving the soil of nutrients.

Pesticide and fertiliser run-off from the tea gardens reaches the Tista river that runs 30 km through Darjeeling district and its tributary, the Rangit. Though there is little scientific evidence, local people complain that fish population in these rivers has declined. Says Nar Shankar Rai, member of local chapter of World Wide Fund for Nature -- India: "People have found dead fish in the river in the past few years. It may very well be associated with the high pesticide residue in water."

Says Harish C Mukhia, a tea industry consultant: "The solution is to replace the old bushes in a phased manner. But, as of now, no one has done a cost-benefit analysis". He explains that the estates change hands very often and therefore the aim is to extract as much as possible from the land, without caring about the consequences.

In the new mode of bio-organic farming, production is little less as compared to the old mode. Rathore notes that the loss can be compensated by the clean, high-quality product. But the problem is the inadequate availability of manure in a highland where there is very few cattle. Moreover, bio-fertilisers and bio-pesticides are much more expensive, he notes. Despite these difficulties, tea managers are responding, albeit a token one.