Children diagnosed with autism have impaired social interaction and communication ability which delays their cognitive and language development. Professor Svetha Venkatesh and her team at Deakin University in Australia have devised an application that can help such kids learn the fundamental cognitive skills. Venkatesh was in Delhi recently. She speaks to Ratnika Sharma about her innovation 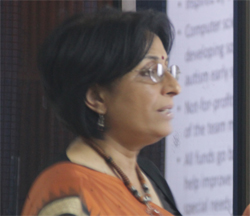 How did the idea of TOBY Playpad (Therapy Outcomes By You) strike you?

I started building an application to help autistic children five years ago after being inspired by my post doctorate student who had an autistic child. I thought that if I can build programmes to make the machines learn and perform tasks, why cannot I build something that would help special children learn fundamental cognitive and social skills. My team, which consists of therapists, psychologists and computer scientists realised that for the programme to work it would have to be touch-based and hence tablets would be the best medium. We chose Apple's operating system because at that time that was the most stable interface that was available. Android was still developing. However, we are working on getting this application on the Android as well.

How much does it cost to download the application? Where is it available?

It costs around Rs 5,500. But there is a free version also which is called TOBY Lite. It is a trial application. It can be downloaded from Apple iTunes store. One application can be used only for three children; that could be a problem in the Indian scenario, because having the iPad itself is the bottleneck due to its high cost. We are trying to develop a multiple-user interface for the country.

How does TOBY work? What will it do?

TOBY empowers parents in delivering therapy to their child. It works on a set curriculum that covers four fundamental areas of early learning skills—imitation, language, social skills and copying and matching. It teaches 52 activities in 322 ways. The curriculum is delivered in two ways—a 20 minute On-iPad set of activities and another 20 minutes of Off-iPad activities that would require the child to complete Natural Environment Tasks that might be a part of playtime or daily routine like bath time, meal time. The difficulty level varies from easy to complex as the child completes each activity and progresses further along with TOBY giving reinforcement advices as to when and where to prompt the child. The activities in the curriculum can be unlocked only if the child finishes the given set activities for the day that is monitored via graphs and visual charts. The utility of this application lies in the fact that it tells the parent exactly what to do in order to make the child learn a particular skill. It sets out the activities to be done on and off the tablet and   absolves the parent from going to a college to learn therapy for their child. After a certain point, parents themselves will invent new activities and can do away with TOBY altogether.

How will it help the current therapists that the kids are seeing?

This application not only benefits children and parents but also therapists. They can use it as an aid to complement their current therapy and focus on the more complex parts. It also helps the therapists to pin point problem areas of the child through TOBY's progress card and work on them. TOBY helps the child to learn how to learn.

How do you hope to make it viable for India?

Deakin University has partnered with National Trust and Business and Community Foundation who have agreed to promote this across the country and make it viable for as many organisations as possible. We have called for volunteers to receive TOBY training to consultants who would then train others. I am also giving out ten applications free of cost to interested organisations.