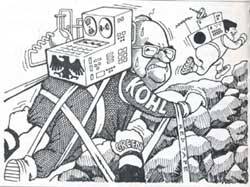 GERMANY is having the jitters about losing its reputation as the producer of world class technologies. In an open acknowledgement of the country's technological downslide, German chancellor Helmut Kohl is creating a National Technology Council to focus on technological shortcomings and revise policy.

Kohl pointed out that in microelectronics, the number of German patents between 1987 and 1992 had shrunk from 289 to 181, while in Japan it rose from 17,408 to 23,082 and the US doubled its patents in the field from 848 to 1,671. "We see similar lags in large computers, communications, electronics, office technology and lasers," Kohl warned.

Hoechst AG's $90 million plant to manufacture genetically-engineered human insulin is typical of the malaise that now grips Germany's technological sector. Although the plant could have gone on stream in 1988, bureaucratic delays at every step led to an endless merrygoround of public hearings, project revisions and permit reapplications.

Hoechst's ordeal is not over yet -- a licence for commercial production is still to be received and the authorities are likely to give a green signal to the market debut of the product only by 1996. Human insulin appeared in the US market in 1984 and other companies have stolen an edge over Hoechst in its home market.

To circumvent such problems, many companies are looking outwards. Schering AG plans to produce in the us its genetically-engineered drug to dissolve blood clots, although all the research was done in Germany; and Bayer AG did not even attempt to produce its medication for haemophiliacs within the country.

Wolf-Dieter Schleuning, head of Schering's molecular biology section, attributes the technological slowdown to the public's "hostility to technology". Dispirited chemical and pharmaceutical industry circles believe that, because actual regulation is done at the state level, this public contrariness will not change much -- even after a federal law to streamline regulations on genetic engineering is put into effect on January 1, 1995.

The German "techno-angst" is likely to continue until the bumbling technological giant gets its act back together.