The department of science and technology has initiated public debate on ways to stimulate the country's stagnating research and development activity. 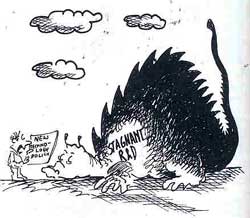 INEFFECTIVE funding and easily accessed foreign technology are twin reasons for Indian industry's halfhearted funding for research and development. In 1990-91, industry's share of the R&D expenditure of Rs 4,186 crore was only Rs 970 crore, or about 23 per cent. In comparison, industry's R&D funding in technologically progressive countries was about 80 per cent.

Now, Union minister of state for science and technology P R Kumaramangalam asserts the country's switch to liberalised and competitive economic policies necessitates a new technology policy that gives greater attention to R&D. He wants to levy a cess of 2-3 per cent on industry turnover to fund better R&D.

The department of science and technology (DST) has drafted a paper for a new technology policy, hoping to initiate a public debate and arrive at a consensus on objectives. Its preamble states the policy aims at "giving a renewed sense of purpose to indigenous technology for its accelerated development (while) keeping in view the need to adhere to international quality systems, as well as preserve the environment."
Copies of the draft have been widely circulated and this has brought down on DST's head the wrath of the parliamentary consultative committee on science and technology. Its members resent they were not consulted when the draft was prepared. Committee member P V Pramanik of the CPM says a parliamentary debate on the policy would have enabled the various parties to present their views. DST officials, however, maintain there was no need to consult the committee because the draft is only a broad statement on the areas to be debated.

Meanwhile, the draft has evoked a different grouse from A Rahman, founder-director of the National Institute of Science Technology and Development Studies. He maintains there should be two drafts -- one reflecting DST policy and the other listing a counter-policy formulated by experts -- and they should be discussed simultaneously. Says Rahman, "Debates on technology policy cannot be public debates in a true sense, as there is no scientific awareness among the masses."

Though one of DST's objectives in preparing the draft is to strengthen links between industry and laboratories, V Raghuraman, secretary general of the Associated Chambers of Commerce and Industry of India, ruled out this possibility unless the laboratories allow industry a greater say in recruitment and promotion policies.

The draft sets a target of raising funding for research, development and engineering (R&DE) from about 0.9 per cent of gross national product now to 2 per cent by 2000. But this, too, has been criticised, with M A J Jayseelan, additional secretary of the Federation of Indian Chambers of Commerce and Industry, insisting government interference is unneeded as economic liberalisation will automatically boost R&D. And, former planning commission member P N Srivastava points out the 1993 budget makes no significant increase in R&D expenditure.

The draft has been taken up for discussion by organisations such as the Indian Association for Advancement of Science, and DST officials say the new policy statement, incorporating all suggestions, will be ready by June. But Rahman is skeptical and says the final policy will be what only the government wants and what it feels protects elite interests.