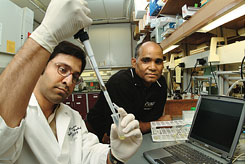 food poisoning might just be arrested before it strikes using a new method developed by researchers at Purdue University, usa. They have come up with a technology that even retail outlets can use to detect pathogens in food before it is sold.

"The method allows us to detect live pathogenic bacterial cells within two hours," says Arun Bhunia, member of the team that devised the new technology. "It can also recognize very small amounts of Listeria monocytogenes, a bacterium that kills one in five infected and causes food-borne illnesses," he adds.

The technology involves use of live mammalian cells that release a measurable amount of signaling chemicals when harmed. The technique, which has food safety applications, can also estimate the number of microbes present and whether they pose active health risk.

"We used a cell line from a mouse, immobilized it in a matrix and exposed to food-borne pathogens. When the cell line is exposed to toxins, the cell membrane gets damaged. The damage is measured by an indicator that changes colour proportional to the amount of toxins present," says Bhunia. The study was published in the February issue of Laboratory Investigation.

The technology scores over conventional tests that take 16-24 hours to detect pathogens in food, says William Selvamurthy of the Defence Research and Development Organization, Delhi. "The present method allows for large sample tests. It can be used in army units or where mid-day meals for school children are being prepared,'' says Selvamurthy.

K N Gurudutt, director of Central Food Technological Research Institute, Mysore, advises caution. "Rapid test kits are handy. But the major constraints are high cost and specificity. Moreover, several kits are needed to establish the safety of a food, which escalates the cost," he says.