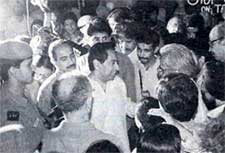 A function to mark the World Environment Day and the 17th anniversary of the National Museum of Natural History, witnessed high drama as anti-Tehri dam activists gheraoed the Union minister of state for environment and forests (MEF), Kamal Nath, at Delhi's Kamani Auditorium.

Madhu Kishwar, editor, Manushi journal, flayed Kamal Nath for mouthing concerns even as Sunderlal Bahuguna, the prominent Sarvodaya leader, was on the 27th day of an indefinite fast, denouncing the Tehri Dam.

Heated altercations between Nath and Rajeev Dhavan, a Delhi-based senior advocate, were followed by a gherao. The protest was organised by the Tehri Action Committee. The protestors called for a halt to the construction work at the dam. But Nath said, "I condemn the dam, but it is not within my power to stop the construction."

Nath however, agreed to set up 2 review committees within 20 days. The investigation committee will comprise of some of India's top seismologists like Vinod K Gaur, K S Valdiya, R N Iyengar and K N Khattri. The former MEF secretary, R Rajamani will be in the environmental impact assessment committee among several others.

Earlier, social activist Medha Patkar was arrested for allegedly violating Section 144 (2) of the CrPC barring her from entering Tehri Garhwal district. Arrested on June 5 near Rishikesh, on her way to Tehri for an anti-dam demonstration, Patkar was later brought to Delhi under police escort and released later in the evening.