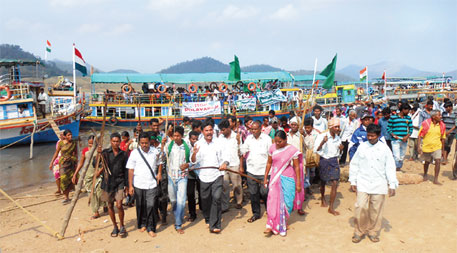 THE passage of the bill to carve out Telangana state from Andhra Pradesh has come as a blow to about 200 villages in the tribal areas of Khammam district. These villages, which are part of the Telangana region and are threatened to be submerged by the Polavaram dam, will be transferred to Seemandhra when Andhra Pradesh is bifurcated. For many years they have been part of the agitation for creation of Telangana and protests against the Polavaram multi-purpose irrigation project.

The Andhra Pradesh Reorganisation Bill proposes national status for the Polavaram project and merging of Khammam villages with East Godavari district in Seemandhra. The bill has been passed by both the houses of Parliament and awaits the President’s nod. The adivasis in Khammam are disappointed that the leaders of the Telangana movement compromised their interests while fighting for the larger cause of Telangana. “They should have resolutely pressured the Central government to withdraw national status to the Polavaram project and to keep the tribal areas of Telangana in Telangana itself,” says Vattam Narayana Dora, convener of Polavaram Project Vyathireka Ikya Poratta Vedika, an umbrella organisation of adivasi groups protesting against the project.

The people also fear that becoming part of Seemandhra will jeopardise their resettlement in Khammam itself.

The Rs 16,010 crore project is under way in West Godavari in Seemandhra. However, most of the villages that will be affected are in Khammam. After bifurcation, at least 193 villages from two revenue divisions, Bhadrachalam and Palvancha, of Khammam will be transferred to Seemandhra. This tribal-dominated region enjoys special protection under the Fifth Schedule of the Indian Constitution. The project, which will also submerge some tribal villages in East and West Godavari and neighbouring Chhattisgarh and Odisha, besides submerging 3,500 hectares of forests, is expected to displace about 200,000 people, the highest ever by any dam in the country.

“The Central government is adamant on constructing the Polavaram project unmindful of its disastrous consequences on the lives of adivasis. This will undermine the rights guaranteed to them under the Fifth Schedule,” says Punem Ramachander, state general secretary of Adivasi Samkshepa Parishad, a tribal organisation leading the agitations.

Adivasi communities in the submergence zone include Particularly Vulnerable Tribal Groups (PVTG), such as the Konda Reddy. PVTG is a Government of India classification to identify and improve the living conditions of certain communities with particularly low development indices. Most of them are agriculture labourers or marginal farmers. They, along with non-tribals in the area, have been demanding scrapping of the Polavaram project ever since it was taken up by the state government in 2005. The project does not benefit Khammam or any other part of Telangana. It is expected to irrigate 300,000 hectares in East and West Godavari, Krishna and Visakhapatnam districts, all in Seemandhra.

“Many of the submergence villages have passed resolutions against the project, which will rob adivasis of their land, water, forest and livelihood,” says Dora. The Central government gave national status to Polavaram to please Seemandhra’s leaders and people, he adds.

When the amendment to the bill for transferring the tribal villages to Seemandhra was proposed on February 7 this year, people in Bhadrachalam and Palvancha strengthened their agitation. They took to the streets with bows and arrows, blocking national highways, picketing government offices, besieging ministers and their houses. “We submitted petitions to the president, prime minister, governor, chief minister and tribal ministers against the move. But they ignored all our appeals,” says Podium Narendra Kumar, a tribal activist.

All the villagers Down To Earth spoke said they wanted to remain in Telangana where they have been living for generations. “The project is imposed on us. If the government goes ahead with it, we want to be rehabilitated in Khammam itself,” says Krishna Reddy, a farmer.

The Right to Fair Compensation and Transparency in Land Acquisition, Rehabilitation and Resettlement Act, 2013, provides for “land for land” in the same region for people affected by irrigation projects. The Act has provisions to ensure that all benefits to the Scheduled Tribes and Scheduled Castes in the affected area continue in the resettlement area.

“The plan was to rehabilitate the affected people in tribal areas of Khammam itself,” points out Adityanath Das, principal secretary, State Irrigation Department. For this, the government had identified some villages in Bhadrachalam and Palvancha revenue divisions. As per the present proposal, the villages identified for resettlement will remain in Telangana, while most of the submergence villages will be transferred to Seemandhra. This will complicate things, he says.

To compensate for the land that will be submerged, the law requires the government to make available 12,800 hectares in the same region. But the government could not find adequate land in Khammam, point out tribal leaders. “How can it be assured that the Seemandhra government will find land to rehabilitate people? And even if it does, can people be rehabilitated in such a way that they can continue to pursue their livelihoods? If the adivasis from Schedule Five areas of Khammam are resettled in non-scheduled areas, they will lose their privileges,” explains M Babu Rao, former member of Parliament from Bhadrachalam. 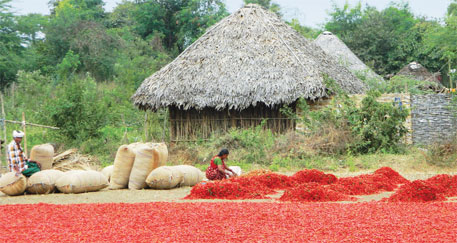 The tribal people who will be affected by the partition have raised doubts over getting a fair deal in resettlement and rehabilitation. “We do not believe any government will be able to rehabilitate about 200,000 people, who will be displaced by the Polavaram project, with houses, land and an alternative livelihood,” says Dora. He points out that some families displaced by the Nagarjuna Sagar Dam 50 years ago have still not been rehabilitated.

Many tribals do not possess title deeds. People in a majority of tribal settlements have not received individual or community title deeds under the Forests Rights Act, 2006. “We had filed claims, but were not given title deeds on the pretext that the area will be submerged,” says Venkateswara Reddy, chief of Pochavaram village.

The tribal leaders are now demanding that the Centre shelve the Polavaram project, drop the move of “merger” and create a state of Gondwana comprising the Fifth Schedule tribal areas spread in Andhra Pradesh as well as in Chhattisgarh and Odisha.