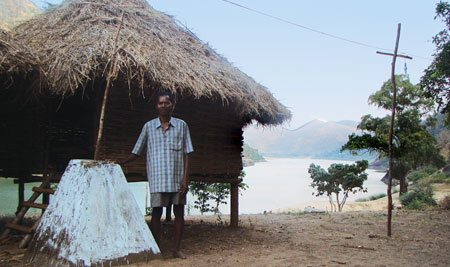 Ten districts of Telangana are observing a day-long bandh on Thursday in protest against the Central government's decision to merge seven administrative blocks of Khammam district (in Telangana) with Seemandhra to execute Polavaram irrigation project. The ordinance, to make the merger effective, was signed by President Pranab Mukherjee on Wednesday.

The bandh is called for by the Telangana Rashtra Samithy (TRS), led by K Chandrasekhar Rao who is going to be the first chief minister of Telangana. He has called for all commercial and trade establishments to be shut voluntarily.

The seven blocks that are going to be added to Seemandhra (residual Andhra Pradesh) are in Bhadrachalam revenue division and contain 74 gram panchayats, 190 revenue villages and 264 tribal settlements that will be submerged. The Narendra Modi government at the Centre went ahead with the ordinance despite strong opposition in Telangana.

"The boundaries cannot be altered through ordinances when two elected governments are waiting to take charge. They can be altered only after the Parliament discusses it," said Rao while addressing the media in New Delhi on Wednesday. The ordinance was against the spirit of democracy, he said.

According to the Andhra Pradesh Reorganisation Act 2014, the Polavaram Irrigation Project has been declared a national project. The Centre now has to take control of regulation and development of the project.

"It is unfortunate that Prime Minister Narendra Modi has chosen an undemocratic course by promulgating an ordinance for altering the boundaries of the newly-born Telangana," said Rao. The state will come into existence on June 2.

“Altering the boundaries of a state or creating a new state can happen only as per the procedures prescribed under Article 3 and not by any other procedure, not even by ordinary legislative process by the Parliament,” pointed Rao in a letter sent to the President on Wednesday, appealing him not to sign the ordinance promulgated by the new government.

“There can be circumstances which render it necessary for the President to take immediate action. But, in this case, there are no extraordinary circumstances,” said Rao.

"The proposal to delete seven mandals from Telangana and move them to the residual Andhra Pradesh is to facilitate inundation of several tribal villages against their will. And all this is being done for the Polavaram project which has not yet been approved by the competitive authorities within the Centre,” said the would-be chief minister. He also suggested that the best way forward for this project is to redesign it and have a clear roadmap for the rehabilitation of tribals whose villages are likely to be submerged.

Rao, in his letter to the President, alleged that the real motive behind the hurried ordinance is to transfer lower Seleru hydel power project from Telangana to residual Andhra Pradesh. "This project is located in one the seven blocks that are going to be transferred to the residual Andhra Pradesh through the ordinance, he alleged.