A look at the challenges before India's 29th state

KCR sworn in as new chief minister of Telangana
Reconstruction will be state's top priority, but to implement his agenda Chandrasekhar Rao will need to develop a cordial relationship with the Modi government at the Centre
Author: M Suchitra
After a six-decade-long struggle for separate statehood, Telangana became a reality on Monday with the President's rule ending at midnight. The new state carved out under the Andhra Pradesh State Reorganisation Act has 10 districts.
Read More
The big challenges for Telangana
Telangana region accounts for huge chunk of natural resources of the current Andhra Pradesh. When Andhra Pradesh is divided, the existing disputes over these will intensify
Author: M Suchitra, Kumar Sambhav Shrivastava
The Congress-led United Progressive Alliance (UPA) ruling at the Centre is expected to take a final call on the demand for a separate Telangana state at the meeting of its coordination committee on Tuesday. The meeting will be followed by a discussion in the Congress Working Committtee, the policy making body of the Congress, after which a formal declaration is expected.
Read More
Hyderabad: the coveted jewel
Why both Andhra and proposed Telangana state want the city as their state capital
Author: M Suchitra
The most difficult and sensitive part in the bifurcation of Andhra Pradesh was deciding the status of Hyderabad, the capital city. The United Progressive Alliance coordination committee and the Congress Working Committee, while endorsing the carving out of Telangana from Andhra Pradesh, decided that Hyderabad will be common capital to both Andhra and Telangana for 10 years. The city is located in the heart of Telangana. Naturally, Telanagana people were demanding that the city should be the capital of the new state. But most of the investments in Hyderabad were made by rich industrialists and business people from coastal Andhra.
Read More
Fight over regional resources drive demand for new states
Linguistic and cultural identity, which defined state boundaries in the initial years after Independence, take secondary place
Author: Kumar Sambhav Shrivastava
The United Progressive Alliance's decision to endorse creation of the new Telangana state on Tuesday is likely to lead to more strident demands of separate statehood from other regions in the country. The agitations, in fact, have already picked up in several regions. Darjeeling has been shut for the past two days to press the demand for carving out Gorkhaland from West Bengal.
Read More
Are smaller states better off?
Government data shows Chhattisgarh, Jharkhand and Uttarakhand, which were carved out of larger states, have not performed as well as their parent states on development parameters
Author: Kumar Sambhav Shrivastava, Jitendra
It is a popular notion that smaller states have better development prospects. More than a decade ago India created three new states–Chhattisgarh, Jharkhand and Uttarakhand–following long-standing demands and protests. But does a smaller size necessarily guarantee development? The pro-Telangana groups that have been agitating for separation from Andhra Pradesh have asserted that the region would be better off once its people gain control over its resources. B
Read More
‘Development in Telangana should be participatory’
Eminent economist and former Planning Commission member, C H Hanumantha Rao, speaks to M Suchitra on the aspirations of people of Telangana. Rao is presently honorary professor at the Centre for Economic and Social Studies (CESS)
Author: M Suchitra
In my opinion, the first priority should be social inclusion. Now people have high hopes. They truly believe that once the new state is formed it will provide them opportunities and prosperity which they never had in the united Andhra Pradesh. Better education, better employment and better life.
Read More
‘The fight for Telangana is to regain control over its resources and restore cultural identity’
The Telangana Joint Action Committee (TJAC) has been at the forefront of the demand for a separate Telangana state. Its chairperson M Kodandaram speaks to M Suchitra on why only a separate state will satisfy people of the region
Author: M Suchitra
We cannot call off the strike till the Centre announces the formation of a separate Telangana state. It was the last option we wanted to resort to. But we were forced to because of the indifference of the Central and state governments. We had given enough time.
Read More
INFOGRAPHIC 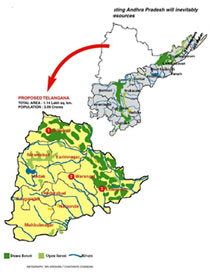