Fibre optic telephone lines which would deliver movies directly to the theatres are all set to stage a revolution if US movie moghuls' high-tech plans are to see the light of the day. A new video technology which will complement this mode will radicalise the idea a theatre by opening it up for Of various other purposes 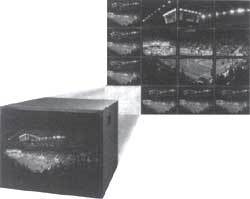 VISITS to cinema halls might be a totally different experience if the dreams of the us film industry's high-tech planners come true. In fact, if every-thing goes as per schedule, the traditional mode of sending movies to cinema theatres in tin cans will be replaced by the information superhighway. The implications for film production and distribution would be profound, say industry experts.

Sending films in tin cans is now being referred to as an asphalt highway mode of distribution. It is believed that technology can now make it possible to distribute movies through fibre optic telephone lines directly to cinemas. But to do so, films must be converted to digital video, which most experts feel are interior in terms of the quality of image when compared to 35mm films, especially on large screens.

One way of upgrading the video image is by using a high definition television (HDTV) image of 1, 150 lines. The World Cup Football finals last year were transmitted to theatres in the us and Europe using a HDTV image via telephone lines. The question of digital video duplicating the richness of the 35mm film image is, however, one of the most crucial issues.

But technology is evolving rapidly and companies are trying to produce a video image of 2,000 lines. In addition, video technology offers theatre owners the ability to programme much more diversely and throughout the day. For example, theatres could be used for live rock concerts, pay-per-view sport, distance learning and various other forms of education and entertainment.

These developments could effect far-reaching consequences. They might result in doing away with film quotas and other boundaries, giving way to a greater flow of information. This will make it easier to distribute Indian films abroad because access to telephone networks and digital video enhances dubbing and other capabilities needed by foreign producers.

That digital video dissemination of films will lead to the demise of theatres, since TV will have the same capability, should not be a cause for concern because nothing can ever replace the experience of viewing on a big screen.