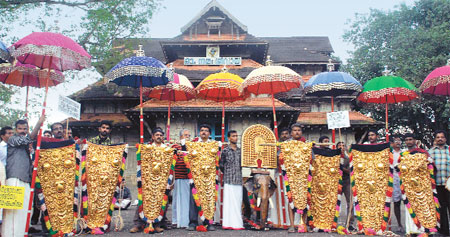 ELEPHANT owners and festival committees in Kerala have come out openly against the Elephant Task Force’s recommendations to the Central government. Stating that the task force has not taken into consideration the state’s cultural and religious traditions, the Kerala State Elephant Owners’ Federation and the Kerala State Pooram-Perunnal Festival Coordination Committee observed October 4, National Elephant Day, as a black day.

In February the Union environment ministry set up a task force for more effective conservation of elephants, both wild as well as tamed. The 12-member task force, headed by conservationist Mahesh Rangarajan, recommended a National Elephant Conservation Authority, imposing restrictions on trapping, taming, buying, selling and transporting elephants (see ‘Need to go beyond elephant numbers’, Down To Earth, September 16-30, 2010). It also recommended taking away ownership of domesticated elephants from their present owners and granting only guardianship.

“The quality of care and management of captive elephants have been seriously inadequate,” said P S Easa, member of the task force and former head of the Kerala Forest Research Institute (KFRI) in Thrissur. Most of the captive elephants in the state were brought from the Northeast and Bihar; individuals, devaswom boards that are in charge of temples and temple trusts own them. Among the largest collection, the Guruvayoor Devaswom has 65 elephants in its possession.

“If the Centre implements all the recommendations of the task force there will not be any captive elephant in another 30 to 40 years,” said M Madhavankutty, president of the Thiruvampadi Devaswom Board in Thrissur.

Taking away the ownership will lead to many complications, say owners. “If owners are granted only guardianship, then the government should take up the maintenance,” said Mangalamkunnu Parameshwaran, who owns 14 elephants— the largest private collection of elephants in the state. Even cremating an elephant costs Rs 1.5 lakh, he said. “Renting out elephants for festivals is a lucrative business,” V K Venkitachalam, secretary of the Elephant Lovers’ Association.