Tense? Cut down on fat 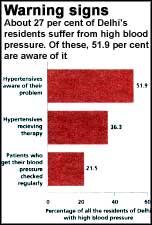 ABOUT 27 per cent of the residents of Delhi, in the age group 35-64, are reportedly suffering from hypertension, or high blood pressure (BP). This could be an underestimate as, according to a study conducted by the All India Institute of Medical Sciences (AHMS), New Delhi, only 51.9 per cent hypertensives are aware of their problem. Amogg those who are aware, only 36.3 per cent are on therapy, and a mere 21.5 per cent get their blood pressure checked. The number of hypertensives is constantly increasing due to stress at workplace, increasing obesity among women above 45, and the growing problem of diabetes.

If untreated, hypertension can lead to an array of complications, including paralytic strokes, kidney dysfunction and heart failure, according to K S Srinath Reddy, professor of cardiology at the MIMS. Hypertension is a greater risk factor for the elderly with an adverse cardiovascular history. Even though studies have indicated that dietary factors can influence the risk of developing hypertension, researchers have made little effort to come up with a diet that can help control the risk.

A recently published study provides compelling evidence that a low fat diet, rich in fruits, vegetables and dairy products, can lower BP as much as any single drug treatment. What is more, it does it in just two weeks. The results of this study, called Dietary Approaches to Stop Hypertension (DASH), are comparable to, or better than, the effect of many drugs (The New England Journal ofMedicine, Vol 336, No 16).

The study, conducted by the National Institute of Heart and Lung Institute, Bethesda, included 459 adults with slightly higher than normal BP, or mild hypertension, defined as Systolic BP between 140 and 1@9 mercury, or diastoliC BP between 90 and 99 mm Hg, which conforms to the World Health Organization expert committee report on hypertension control, which redefined hypertension in 1996. For the first three weeks, the participants were fed the control diet, considered to be the typical us diet, including four servings of fruits and vegetables and half a serving of dairy products a day. The participants were then randomised into three groups. One group was fed on the control diet for another eight weeks, while the other was fed on a diet rich in fruits and vegetables with 8.5 servings a day; and the third group was fed on the DASH, or'combination' diet, which was lower in saturated fat than the other two and included two servings of low-fat dairy products as well as almost 10 servings of fruits and vegetables.

The diets were designed to control the two factors known to affect BP; body weight, and dietary sodium, which is usually taken in the form of salt. All the participants had the same sodium intake, a shade less than the average American consumption. The people participating in the study did not put on any weight during the study period. The four centres that conducted the study prepared all the food for the participants, who ate at least one meal every weekday at the centres. Uncertainty was thus minimised, if not altogether eliminated, besides ensuring dietary compliance.

The diet rich in fruits and vegetables resulted in a mild reduction in BP, lowering the Systolic BP by 2.8 MM Hg, and diastolic by 1.1. MM Hg. The combination diet more than doubled these numbers, reducing BP by 5.5 and 3.0 MITI Hg respectively in people with normal BP. The results were particularly striking in those with mild hypertension, with the reduction in BP being 11.4 mm and 5.5 mm mercury - results normally seen with the use of a single drug.

The researchers are unable to explain how the diet works. But scientists in this field believe that it supports a rather controversial notion that low calcium intake can play a bigger role in controlling blood pressure than high sodium, as many experts believe. Earlier studies have suggested that supplementation of diet with various nutrients like calcium, magnesium, or potassium, may lower BP. But the results have been ambiguous. Other studies favoured a vegetarian diet which may not be acceptable to the American palate. Therefore, a diet that was low in fat - about 2,6 per cent - compared to 36 per cent in the average us diet - was tried, allowing moderate amounts of meat, poultry and fish.

Even if the reasons behind the low- ering Of BP due to the DASH diet are not clear, the diet could only be a win-win option for hypertensives in India, as it could keep at bay several other diseases caused by a fat-rich diet.