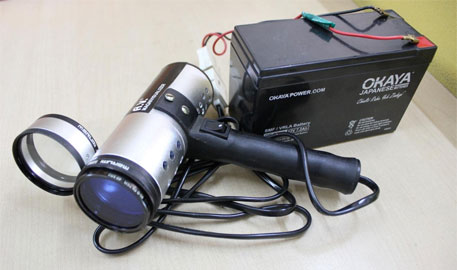 The government will soon begin rolling out a new equipment to check for cervical cancer that could help people in remote areas where absence of pathology labs makes early detection of this life-threatening illness nearly impossible.

The device, named AV Magnivisualizer, will cost Rs. 10,000 and is equipped to work on a 12-volt portable rechargeable battery, requiring no electricity, making it suitable for nearly any remote setting.

“This will make testing cervical cancer as easy as testing for tonsillitis," Union Health Minister Ghulam Nabi Azad said while launching the equipment.

According to cancer registry data at the Indian Council of Medical Research, every year India gets nearly 1.32 lakh cases of cervical cancer and nearly 74,000 women die of the disease.
Azad said this data is conservative because only 16 states participate in the cancer registry and it captures only registered cases.

“The actual number of cases will be much more. Rural India has a high burden of cervical cancer. This device will help in screening in remote areas,” he added.

The new testing device will be made available within nine months and will be provided first at government centres. "The effort will be to roll it out first at community health centres. In the next phase we will make it available at primary health centres," Azad said.

Scientists at the Institute of Cytology and Preventive Oncology of the Indian Council of Medical Research have developed the equipment. It can be used for initial screening in remote areas where pathology laboratories and pathologists are not available to determine cervical cancer.

The AV Magnivisualizer is a magnifying device that visualizes the cervix and assists a doctor or a health worker in examination. If the test shows suspected cancer, acetic acid can be applied on the cervix and if the area turns white it indicates a high probability of cervical cancer. Such patients would then be referred for cytology, a standard test to confirm cervical cancer.

“A V Magnivisualizer is for screening, not diagnosing. It is the first step. By using this, only suspected cases will have to go to district hospitals and medical colleges,” said lead scientist Aditya Parashari, who worked on developing the equipment.

The standard tests so far for detecting cervical cancer are cervical cytology, also called Pap test, or a human papillomavirus (HPV) test, or a combination of both. The machines that perform these tests cost up to Rs eight lakhs and can work only in a pathology lab.

V M Katoch, Director, Indian Council of Medical Research, said — “We filed a patent for the equipment in 2010. Over the last two years we have used it in five centres across the country — one centre each in Kolkata, Jaipur and Tripura, and two in Delhi. Accuracy of the AV Magnivisualizer was found to be 95 per cent."

He added in all the centres except Kolkata the device was used by doctors. “In Kolkata, nurses, auxiliary nurses and midwives used the device. Their accuracy was also the same,” he said. Katoch added health workers require up to three days of training before they can start using the device.

The Indian Council of Medial Research is negotiating with private companies to start manufacturing the equipment. The device can also be used for testing oral cavity. However, the accuracy for the same is yet to be checked.