In Karnataka, a lesson in water scarcity 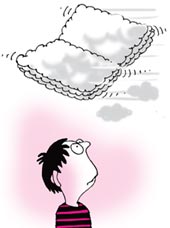 a severe water crisis spawning an acute shortage of textbooks? Strange but true.

Karnataka's school students recently became unsuspecting victims amid this bizarre turn of events. It so transpired that the Mysore Paper Mills (mpm) stopped functioning as its water supply was disrupted due to the drying up of Bhadra river. A lorry strike in April compounded the problem by slowing down the movement of paper consignments to printers and publishers. Consequently, textbooks were unavailable in the market till as late as June.

The government-owned mpm is located along the river in Shimoga district. A six-year-old regulation stipulates that the designated printers and publishers should source raw material only from mpm. The unit supplies about 15,000 metric tonnes of paper every year for printing textbooks.

According to industry sources, production at the facility came down to about 30 tonnes per day as opposed to the maximum capacity of 350 tonnes. mpm is said to have ceased operations for a few days in April. When textbooks didn't reach the market even by May, students and parents panicked.

Rao blames mpm for not drawing up contingency plans. mpm, however, claims that the entire incident has been blown out of proportion. "Our operations were affected for only a couple of days," asserts S M Fathaullah, director, marketing, of mpm.

Tamil Nadu too was faced with a similar situation. Water shortage in the Mettur reservoir forced the Tamil Nadu Newsprint and Paper Limited to shut down one of its machines temporarily.