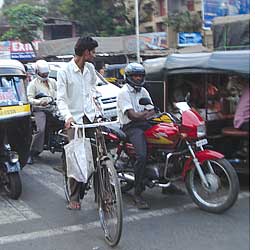 An 82-km cycle track to connect residential areas of the Mumbai suburb, 52 km in the kitty

Pravin Pandurang Mandavkar, 24, serves vada-pav in the Thane Municipal Corporation canteen. Everyday, he commutes from his house in Kharegaon, seven kilometres away, on his bicycle.

The daily commute, he said, is cumbersome and unsafe given the heavy traffic on the seven-kilometre stretch between his home and workplace. He has overheard officials talk of a road meant for bicyclists. "If that happens, my life will become easier and safer," he said.

The municipal corporation is planning an 82-km cycle track in Thane. Of this, the state government has cleared the plan for 52 km (see box Cost backup). The track would be two metres wide, carved out of existing roads, including service lanes, and separated by markings.

"The project will benefit cycle users.Take the example of the 10-km stretch between Teen Haath Naka and Golden Dyes junction (see map). Many labourers and people from the low-income group live here," said Mohan Kalal, an engineer overseeing this project. "There is a 15m service road on both sides of the main road, which leads to various internal roads. The main road connects to the Thane railway station and is ideal for cycle tracks."

Besides carving out a lane for cyclists, the cycle track project would reduce air pollution by 20 per cent, said K D Lala, also an engineer with the corporation. The project is part of a four-phase integrated mobility plan prepared by the municipal corporation (see box The plan). It has sought funds under the Jawaharlal Nehru National Urban Renewal Mission (jnnurm). The corporation has prepared a detailed project report and submitted it to the Centre.

"We have prepared a report for 52 km of network. We hope to get the Central government's approval and begin work by March. The Mumbai Metropolitan Region Development Authority and the state government have approved it," said Kalal.

The corporation is cautious. It's earlier attempt, in 2005, didn't work. "The project failed because it was limited to two kilometres in an industrial estate. This time, cycle tracks would be all over the city," said Kalal.

"We will face problems in removing encroachments, roadside shops, from the road. Resistance is expected from transport unions that park their vehicles on the road."

If the corporation makes cycle tracks, where will we park our trucks? asked a member of a transport union in Thane. "There is no space for cars, buses or trucks. A cycle track will add to the confusion and public rage. We will not allow such cycle tracks to come up," he said. He was so agitated with the prospect of a cycle track that he refused to give his name to Down To Earth.

But, said Lala, safety of pedestrians and cyclists is the priority for the corporation. "Most people do not opt for bicycles because they fear being hit by a vehicle. Fewer cyclists would be hit or run over if there are cycle tracks."

A study by Canada-based lea Consulting Ltd shows how cycle users in Thane have declined between 2004 and 2008. From 5,000 cycles earlier, the numbers, on an average, had reduced to 1,900 cycles per day.

The corporation wants to reverse this trend with its project. The other advantages, Lala said, would be smoother traffic, better maintenance because concrete roads are cheaper to maintain than bituminous roads and less potholes.

For Pravin, it would mean covering the seven kilometres to work in 20 minutes, not one hour.