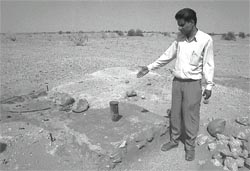 rajasthan chief minister Ashok Gehlot has asked the Union government to verify newspaper reports according to which the government is planning to bury nuclear waste in Thar desert. Down To Earth (Vol 9, No 3) had reported that plans are afoot to dump radioactive waste at Sanawada village near Pokran. This could have enormous environmental implications for the region. Gehlot in a letter to Vasundhara Raje Scindia, the Union minister of state for atomic energy, asked why holes upto 500 metres deep were being dug up in the area. According to media reports, nuclear waste from Bhabha Atomic Research Centre (barc), Mumbai, will be dumped in the holes. "Nuclear waste is highly radioactive and generates intense heat. This will risk the safety of the people of Sanawada. The state government has no information about the activities going in Sanawada," the letter stated.