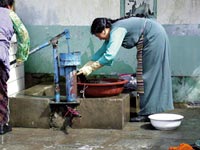 46 cities in China are sinking due to excessive pumping out of groundwater. According to a survey conducted by the Ministry of Land and Resources, rapid depletion of groundwater has lead to the soil sinking below the cities and produced more than 100 massive tunnels covering a total area of 1,50,000 square kilometres across the country.

The Shanghai Geological Research Institute also reports that excessive groundwater pumping contributes to 70 per cent of Shanghai's surface subsidence. Its Pudong New Area region, with more than one million people, suffers most. Its financial district Lujiazui, with the largest number of skyscrapers, was found to have sunk 3 centimetres in 2002-2003.

Alarmed, the government has begun construction of two surface monitoring networks focusing on the Yangtze River delta and the North China plains. Managed by the China Geological Studies Bureau, the networks will be completed in 2006 and will monitor the rate at which the ground is sinking below the cities as well as groundwater levels. Groundwater made up for 19.8 per cent of the total water supply in 2000 as compared with 14 per cent in 1980. The fast-paced economic growth and urbanization, pollution of surface water and the construction of skyscrapers, has all lead to increase demand for groundwater, analysts note.