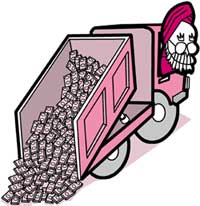 prime minister Manmohan Singh approved a whopping Rs 174,000 crore for the Bharat Nirman scheme on May 16, 2005. The scheme, which will be operational from 2005 to 2009, acuses on improving physical infrastructure in rural areas. Its thrust areas are irrigation, roads, water supply, housing, electrification and telecom connectivity. " Bharat Nirman is the most important initiative of the United Progressive Alliance government this year, offering a 'new deal to rural India'," declared Singh in his meeting with the National Committee on Rural Infrastructure (ncri), constituted by the Prime Minister's Office (pmo) for time-bound implementation of rural infrastructure projects.

The meeting was attended by the Union ministers for finance, rural development, power, panchayati raj, surface transport, communications and information technology and water resources and the deputy chairperson and members of the Planning Commission, apart from senior officials of pmo and various ministries. Union finance minister P Chidambaram later told the media that Bharat Nirman aims to bring an additional 10 million hectares land under assured irrigation, connect all villages with a population of 1,000 (or 500 in hilly/tribal areas) by road and construct six million additional houses for the poor. It proposes to provide drinking water to the 74,000 habitations and electricity to the 125,000 villages in the country that still don't have these facilities. The 66,882 villages that do not have telephone connectivity will also get the service under the scheme. For 2005-2006, Bharat Nirman has increased the allocation for drinking water supply and sanitation to Rs 4,750 crore, a 43.93 per cent hike from last year's quota. Some ongoing programmes like Provision for Urban Amenities in Rural Areas, Integrated Wasteland Development Programme and Drought Prone Areas Programme are expected to get a budgetary boost under the plan.

"The idea of Bharat Nirman is good because it is not prudent to allow inequality of incomes and assets to rise disproportionately. Rural economy has justifiably got a lot of attention in the Budget," says Jayashree Sengupta, senior fellow, Institute of Economy and Development, Observer Research Foundation (orf), New Delhi. orf is a non-profit research organisation. Sengupta, however, warns: "In all these areas, there are ongoing schemes and every government has pledged to improve rural infrastructure, but hurdles remain...A huge amount of outlay does not necessarily translate into effective implementation. Although gram panchayats have been asked to implement the programmes, there would be other leakages to be plugged."

Singh was upbeat about the scheme's success at the ncri meeting: "It will emphasise outcomes and not just outlays and should be implemented with a sense of urgency and dedication at all levels of the government." While some signs of the urgency are visible, a lot more needs to be done. To achieve the goal set for rural roads and develop a comprehensive long-term perspective on the issue, the Indian Roads Congress is in the final stage of preparing a vision document titled "Rural Roads Development-Vision 2025", expected to be released by July 2005. The Rajiv Gandhi Gramin Vidyutikaran Yojana has been launched to take electricity to all villages.