The ACD of malaria control

With the discovery that not all four anopheles mosquitoes transmit malaria, programmes to control the disease need fresh appraisal 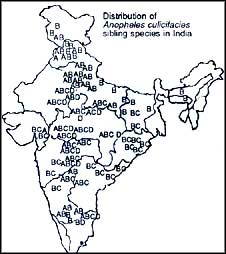 WHY HAS the National Malaria Eradication Programme (NMEP) never really been able to contain the disease? The answer may finally be here. The Malaria Research Centre (MRC) in New Delhi has found that Anopheles culicifacies, the mosquito species responsible for 70 per cent of malaria in India and 80 per cent of the malaria control budget, is actually a complex combination of four species with different genetic characteristics. So, the NMEP may have to be revamped to deal effectively with the disease.

These 'sibling species' of the Anopheles culicifacies (named A, B, C and D), though physically identical, do not interbreed because of genetic incompatibilities. So they are distributed independently of each other throughout the country. This means that every region needs a separate malaria control strategy.

The MRC findings have implications for much of South Asia and parts of Africa, since Anopheles culicifacies is found in a belt that stretches from Aden and Ethiopia through Iran, Afghanistan and the Indian subcontinent down to Thailand, Cambodia and parts of south China. Many of these countries may have to look afresh at malaria control strategies.

"Take the B species, for instance," says V P Sharma, director of the MRC, which pioneered the work on Anopheles culicifacies. "You could say it carries no malaria at all. So we can easily lay off control measures in Manipur, west Assam, north Bihar and northeast Uttar Pradesh, where only B is found." In fact, the incidence of malaria remains negligible in northeast UP even after spraying of insecticides was stopped there in 1964.

Of the sibling species, A and D are the most efficient vectors for malaria (0.8 to 0.9 per cent of mosquitoes are infective), while C is about half as effective. Their resistance to insecticides varies widely, thereby complicating the eradication strategy.

There is a strong relationship between malaria incidence in an area and the type of species prevalent there. In the northern states of Haryana, Punjab and UP, where malaria is endemic, A and B species are prevalent, but A is the predominant member of the Anopheles culicifacies population.

It is actually the harmless B species which has been causing most of the confusion. The species is highly resistant to DDT and BHC, the cheapest insecticides and, unlike the rest, is found throughout the country, usually along with other sibling species. "After spraying insecticides, eradication officials see a lot of mosquitoes surviving, but they don't know that most of them are harmless," says Sarla K Subbarao, assistant director of the MRC, who is in charge of the Anopheles culicifacies project. "So they just use more insecticides, increasing costs and accelerating the development of the mosquitoes' resistance."

The effect was seen most dramatically in Maharashtra and Gujarat, which switched over from DDT and BHC to malathion in 1973. Among the two species found there -- B and C -- C grows resistance power very quickly. Within four years, malathion was useless. Fortunately, the more dangerous species, A, is slow to develop resistance and areas with a combination of A and B, like Haryana, are still relatively safe.

MRC's discovery also has a bearing on methods of malaria control other than spraying. Distribution of chemically-treated mosquito nets, for instance, can be discontinued in regions like Orissa, where B and C are prevalent. "B is harmless, and our study of the biting habits of the sibling species shows that most C species mosquitoes stop biting after 9 pm," says Subbarao. "That makes bed nets pretty irrelevant." Ongoing studies about the food preferences of Anopheles culicifacies -- which also feeds off cattle -- may also yield fresh insights.

Though the MRC is the first research institution to investigate Anopheles culicifacies in such depth, the A and B species were first identified by the London School of Tropical Medicine in 1980 through the analysis of specialised 'polytene' chromosomes.

The MRC identified the C and D species, described all the species in detail and mapped their prevalence. The World Health Organisation (WHO) has now recognised it as a reference centre for work on Anopheles culicifacies. Meanwhile, research has now begun on Anopheles fluviatus, a vector in Orissa, Karnataka, Uttar Pradesh and Andhra Pradesh, for which three sibling species have been identified.