The aid for forces 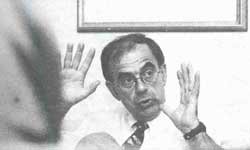 THE Netherlands is one of those rare nations actually spending 0.7 per cent of the gnp on development cooperation. But the country's aid programme has recently drawn renewed flak from its rightwingers.

The criticism has been triggered by the minister of development cooperation, Jan Pronk. To the popular right-wing daily De Telegraaf, this Labour party politician embodies leftist idealism at its nadir, to be blamed for anything ranging from economic decline to a perceived deluge of refugees. The conservative-liberal leader, Frits Bolkestein, recently described him as 'representing a school of thought supported by the Dutch society 20 years ago.

But it was also Pronk who ignited the discussion on Dutch foreign policy, the 'recalibration' (herijking) debate as it has become known. Although it was meant to be an in-depth reassessment of the country's position vis-a-vis global development, it now hinges mostly on the question who will snatch away the additional us $250 million available for foreign policy. In the coalition agreement, the paragraph on aid starts off stating 0.9 per cent of gnp the aim for 1998, but then says that this is subject to the reassessment debate's outcome.

Bolkestein questioned the aid effort's effectiveness saying, it has not spurred economic development anywhere. He called for its thorough evaluation. An expert calculated that Dutch financial flow amounts to less than us $0.16 a year per capita in the case of India.Bolkestein argued that aid should be cut back on channelling the savings to the defence sector, as this department has trouble carrying out the agreed cuts without compromising on quality. But minister of defence, Joris Vioorhoeve criticised the bargain. On the other hand, the parliamentary Labour leader, Jacques Wallage, declared that his party should do away with 'figure fertishism' -- not quite the kind of support Pronk could hoped for.