The air just got dirtier 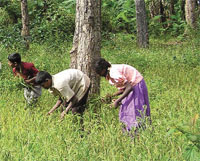 HERBICIDES atrazine and metolachlor, commonly used to remove weeds and pests from crop fields were until now labelled nonvolatile. It was thought that most environmental risk from these pesticides comes from surface runoff—water from rain, snowmelt and other sources that flows over the land surface.

But the US Department of Agriculture (USDA) has found that more of these herbicides are lost through vapourisation than runoff. The team led by soil physicist Timothy Gish analysed loss of the herbicides in the US over an eight-year period beginning 2001. The chemicals are known to contaminate surface and ground water.

Rain has to occur close to application for both runoff as well as volatilisation but the magnitude of volatilisation exceeded that of runoff manyfold, the team notes. The worst-case scenario is wet soil, high saturation and high temperatures leading to high pesticide volatility, they add. They found losses of 15 to 20 per cent were common when soils were slightly moist.

“The study gives a better idea of herbicide loss under variable conditions,” says P Malarvizhi, professor at Tamil Nadu Agricultural University in Coimbatore. If the losses through nonvolatile herbicides are so high it will be interesting to analyse the loss of volatile ones. I expect them to be as high as 80 per cent he adds.