Alcoholism and genes: a collaborative study is closing on in establishing a link between the two 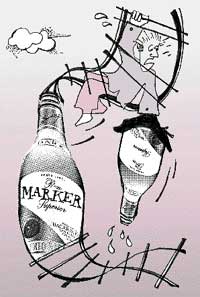 The only finding to the credit of the scientists, achieved a few years back, also fell apart in confirmatory reports. The finding suggested that a faulty brain-protein gene goaded some people to alcoholism. Although the disease is among the most prevalent and costly in the world, there is no clear understanding of its molecular underpinnings and neither is there any scientific way to prevent or treat it.

But this apparently hapless situation might change in the near future. A collaborative effort underway for the past seven years, is about to bear fruit. The first results of the study: a map of genetic 'hot spots' showing which regions within the 23 pairs of human chromosomes are linked to a tendency for alcohol abuse. The collaborative study on the genetics of alcoholism was created in 1989 by the Institute on Alcohol Abuse, a division of the National Institute of Health, us. The preliminary findings were recently presented in Washington, at a joint meeting of the Research Society on Alcoholism and the International Society for Biomedical Research on Alcoholism.

"Discovery of one or more genes that contribute to the risk of alcoholism could bring many benefits," said Enoch Gordis, director of the National Institute on Alcohol Abuse and Alcoholism. "Most important, scientists can see what such a gene does in the body, then develop drugs that subdue its detrimental effects."

Alcoholism is caused by a combination of many genes whose influence is modulated by various environmental and social factors, unlike inherited disorders where a single genetic mutation sentences a person to disease. Since, there are several kinds and degrees of alcohol dependence, any study to dissect the genetic correlation must be large. Therefore, the study design which seeks to solve the mystery, had to be large, needed inclusion of carefully selected families and the collection of detailed genetic, physiological and behavioral information. The us $60 million study is based on a clear simple principal: if a particular gene is associated with alcoholism, then affected members of a family should share that version of the gene more often than would be expected to occur by chance.

There are about 80,000 genes in human chromosomes. The researchers selected several hundred of 'marker' regions spaced almost evenly along the chromosomes in each participant and studied all of them. Normally, one would expect a random distribution of marker variants among different individuals. But for a handful of markers, they found that alcoholics were far more likely to have a particular variant than nonalcoholics. Although the markers are not genes, findings show that a gene in the proximity of that marker may be responsible for an alcoholic inclination.