The Andamans up for grabs 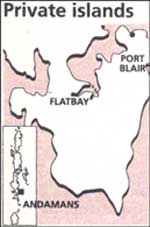 Dubious land sales that hold grave implications for fragile ecologies have set a dangerous precedence in the strategically sensitive Andamans and Nicobar Islands. What is more ominous is that the powers that be, including the apex Island Development Authority (IDA), plead ignorance of such land transactions. S Z Qasim, member of the Planning Commission and in charge of the IDA, even admitted his inability to access information on the land deals from the island authorities.

It is alleged that between 1988 and 1992, 5 islands in Flat Bay, barely 10 km from Port Blair and measuring between 0.23 ha to 2.93 ha, were sold to the Imperial Granite Company of Madras, and one to Captain Kesri Noble, scion of a local influential family. The clamour for land reached its peak when Port Blair was being considered as a candidate for a free port.

Even the MEF seems oblivious of these developments, despite the fact that about 87 per cent of the land in the Andamans is owned by the forest department, and any private land deal would require careful scrutiny as in most of them the boundary between forest and revenue land is either unclear or disputed.