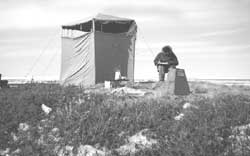 snow covered tundra vegetation of the Arctic region starts absorbing carbon dioxide ( co 2 ) from the beginning of spring, says an ecologist. Therefore, it may be the so-called missing 'carbon sink' (anything which absorbs co 2 ), which is not being taken into consideration right now while analysing the process of absorption and emission of co 2 across the world. "The evergreen tundra plants of the Arctic region absorb co 2 during photosynthesis," says Gregory Starr of the University of Florida in Gainesville, usa . Beginning in 1997, he conducted several experiments in Toolik Lake Field Station, 210 km north of the Arctic Circle. It is significant that the plants start photosynthesis in early spring itself, absorbing more co 2 than was estimated earlier .

Starr aimed to observe how red pigment of tundra plants helps them in photosynthesis. But, during his study, he observed that a lot of sunlight reaches the snow-covered plants. He started observing four species of evergreen tundra plants growing in an area of 40 hectares. For two years, he measured light, co 2 levels and temperatures in the area every week during spring. He covered the plants under observation with jars, which contained co 2 detectors. He then correlated the result with the level of chlorophyll and other plant chemicals.

To his surprise, Starr discovered that the snow-clad tundra vegetation was cuddled in a cosy layer of air, which was 5 c warmer than outside. Starr says the melting and refreezing snow forms "ice lenses" that let sunlight through and allow leaves to dry. This aids photosynthesis. The snow also traps co 2 released by soil microbes. This co 2 is used by the plants. Starr, observed that the plants were able to achieve 20 per cent of their full rate of photosynthesis during the peak ice melting season. This, combined with the absorption of co 2 by the tundra vegetation during the latter half of the spring and early fall, when there is both snow and sunlight, was absorbing 15 per cent more co 2 than what was estimated earlier, Starr concluded ( Science, Vol 298, pp 2031).

Starr's observation is backed by the work of Walter Oechel and Yoshi Harazono, ecologists at the San Diego State University. They have been measuring co 2 emissions and absorption levels of the Arctic region starting from the mid 1990s. They say that co 2 absorption in this region begins in early spring. In the past, most ecologists have ignored the importance of tundra vegetation in early spring. But Starr has thrown a different light on the issue. "This might be the global sum of much smaller pieces," Oechel says. To understand the process of co 2 emission and absorption, more research needs to be done for each major biome (a community of flora and fauna in equilibrium with the environmental conditions of an area), Oechel suggests. The Arctic region may become an even bigger carbon sink if the region's climate keeps becoming warmer. As a result, deciduous plants will replace mosses and evergreen vegetation of the region.