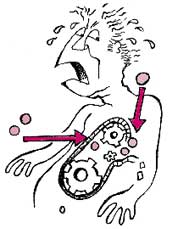 a controversial theory -- molecular mimicry -- is doing the rounds in medical circles in the us. The theory holds that due to a similarity in structure of the human body's proteins to that of viruses', the immune system plays the role of a destroyer rather than that of a protector. Molecular mimicry hits out at common pathogens like viruses and bacteria which set off autoimmune diseases after a person's immune system makes a mistake and confuses both the foreign proteins with that of the human body's. In other words, the immune system while annihilating the foreign organisms, also targets the healthy protein structures.

It has been some time now that pathogens have been implicated in autoimmune diseases, but there was no accompanying proof. According to Phillipa Marrack, an immunologist at the University of Colorado Health Sciences Centre in Denver, "They have found a smoking gun but they still do not know if the gun is pointing at the person who got sick." How does molecular mimicry work? Let us suppose that a person is exposed to the coxsackie virus (a group of viruses that cause respiratory, neurological and muscular diseases). The virus lodges in the respiratory tract and immediately, the body's immune system gets the t-cells (killer cells) to attack the foreign virus. It could, however, be possible that the protein contained in the islets of Langerhans (cells in the pancreas which produce insulin) -- glutamic acid decarboxylase (gad) -- resembles the virus's amino acid sequence. The t-cells bent on destruction not only kill the throat cells infected with the virus, but also the islet cells resulting in the person developing juvenile diabetes.

According to Eli Sercarz, a professor in the department of microbiology and molecular genetics at the University of California, Los Angeles, t-cells which recognised the proteins from their own bodies were killed off in the thymus -- a kind of t-cell nursery -- early in life. The thymus contained a master list of the body's important proteins and when t-cells are born, those that compare with the master list of proteins, are killed. Only those t-cells that recognise foreign bodies are allowed to circulate within the body system.

Research has now shown that there are several body proteins like the islet cells' gad protein and certain others found in the brain which do not find a mention in the thymus list. So t-cells which recognise these proteins are not destroyed and enter the body's immune system. States Lawrence Steinman of Stanford University, California, that while an initial infection with a virus may produce destructive t-cells, further encounters with the same virus or those like streptococcus bacteria are required for the debilitating effect to set in, leading to the emergence of autoimmune diseases.