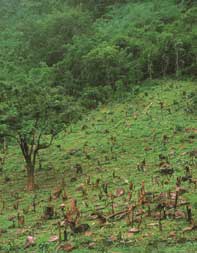 The government of Orissa lifted a 1992 ban on felling of trees in 11 of its 50 forest divisions in September this year. "The move was not based on any scientific assessment. The forest department (fd) has not analysed the impact of the ban," says B B Pandey of the Regional Centre for Development Cooperation (rcdc), a non-governmental organisation, in Bhubaneshwar. rcdc held a public meeting on November 7, 2005, to discuss the lifting of the ban.

Even foresters agree that the fd does not have the resources to monitor felling according to working plan (wp) requirements (wp s chalk out land for felling and the procedures governing them). The state's fd is short of staff; 40 per cent forest guard posts are vacant.

"The working plans for 11 divisions have been approved by the Union ministry of environment and forest," says Bhagirathi Behera, director (operation), Orissa Forest Development Corporation (ofdc). According to him only a restricted number of trees will be cut, especially old and mature trees, which will otherwise rot and lose their timber value.

Officials say if officers are present in forests for felling operations, illegal logging will be reduced. "But isn't it the job of the fd to be present and prevent smuggling anyway?" asks Pandey.

Y Giri Rao of the ngo Vasundhara, who has studied the wp s, says, "They are revisions of decades-old British era ones. Decisions about current forest density are based on biomass studies done only on sample patches of 8-10 hectares." A wp is also supposed to adjust the annual yield against illegal removal and natural loss. According to Pandey, only one of the plans takes this into account. He adds, "This means felling will be done over and above what has already been lost." Unscheduled felling due to diversion of forestland for mining projects -- 43 new steel plants are proposed in the state -- is not deducted from the total that can be felled, he says.

The Orissa Jangal Manch (ojm) -- comprising members of district federations of community forest protection groups -- has been the strongest opponent of this move. Community groups have been protecting forests, some for over 10-15 years, often by restricting their own needs. "There have been cases of conflicts leading to bloodshed when outsiders have tried to cut trees. Lifting the ban will open the forests to the timber mafia and increase conflict between villages," says Sudarshan Chotroy, a local journalist.

Under joint forest management agreements, the fd is supposed to give community groups -- vana surakhsha samitis -- 50 per cent share of the revenue. "Even if some of these groups allow cutting, the fd would never give them their share," Chotroy says.

Revenues of the fd have been falling since the ban. Since 2002, a mere 3.46 per cent of the 10th Plan funds have gone to forestry and wildlife -- the need for generating revenues through felling is increasing. But a state that has spent the last decade telling forest-dependant communities to protect forests, will find it difficult to convince them of the logic of cutting trees now. Orissa lifts a ban on tree felling; faces logic crunch