The bacteria behind the iron curtain 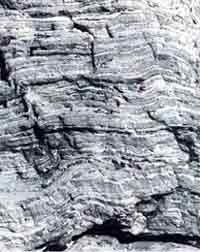 HUGE DEPOSITS of iron found in different parts of the world has puzzled geologists because oxygen, which is an important constituent of iron ore, was scarce when they were formed about 3.5 to 1.8 billion years ago.

Now, F Widell and his colleagues from the Max Planck Institute for Marine Microbiology, Germany, suggest the required oxygen was supplied by bacteria. This follows their discovery of a new species of bacteria that not only make food without oxygen, but also frees the carbon from it to make its food (Nature, Vol 362, No 6423).

The scientists suggest such bacteria made use of ferrous ions, freely available in ocean water at the time these impressive iron formations were created, to free oxygen from carbon, thereby converting the iron into its ore form, which then settled on the sea-floor.

Although the biological origin of such iron deposits has its supporters, lack of fossils of microbes and low organic carbon content (suggesting not many organisms existed that consumed the carbon from carbon dioxide) in the deposits is seen by some as strong evidence against the hypothesis. For instance, widespread banded iron formations, such as those of the Hammersley Basin in Australia, would seem to require an army of microbes to yield the rich iron deposits found in the basin, but no fossils have been found.

Notwithstanding the unfavourable evidence, however, the microbe may have been able to generate large iron deposits without preserving significant quantities of organic matter in the sediments, say Widdel's supporters. For, they contend, sediments underlying moderately productive regions of the open ocean today are typically low in organic carbon and enriched minerals.