The battle is won, but who won the war?

Hiroshi Nakajima has been re-elected director of the World Health Organisation. But the road ahead promises to be bumpy for the controversial Japanese civil servant. 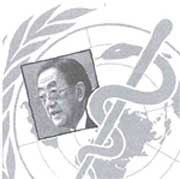 NOW THAT Hiroshi Nakajima has been confirmed as director of the World Health Organisation (WHO), at the organisation's annual general assembly held in early May, he has to start setting his house in order -- a formidable task by all accounts.

At the WHO annual general assembly, 93 countries voted for Nakajima, while 58 preferred the American-European-Arab sponsored Abdelmoumene.

A recent poll showed 73 per cent of WHO personnel have expressed their unwillingness to work with Nakajima and said that, were it feasible, many of them would quit WHO. "I do not know how he will reinstate confidence among the staff. Low morale and demotivation is rampant among all the 4,600 WHO employees," said a doctor, minutes after Nakajima's re-election.

Ever since Nakajima was re-elected director in January by the WHO executive body, he has been in the international spotlight for alleged corruption. His management is said to be far from spotless; he is considered so autocratic that even donor country representatives are not at ease interacting with him. In 1990, Jonathan Mann, an American doctor chairing the Global AIDS Programme, openly declared he was resigning from his post because he could not get along with Nakajima.

Last December, The New York Times published a report suggesting 21 of the 31 members of the executive body were either threatened or offered certain undue favours by the Japanese clan to support Nakajima's re-election. According to this document, Japan threatened to stop importing fish from the Maldives and coffee from Jamaica if they did not vote for Nakajima, while Algeria was told that Tokyo would freeze a loan of $250 million if Nakajima's opponent for WHO directorship and ex-assistant WHO director, Mohammed Abdelmoumene, stayed on in the race.
The American-European-Arab alliance, which opposed Nakajima and supported Abdelmoumene, lobbied for and obtained a commission of enquiry to search into the allegations of vote-buying by the Japanese. An external audit team headed by Britain's auditor general Sir John Bourn found 65 contracts had been awarded during the six months preceding the election. This abnormally high number of contracts, thrice the number awarded in 1991, concerned mostly temporary missions across the continents.

Though the audit report did not directly link any of the contracts to Nakajima, it nevertheless pointed out that at least six of them had been authorised by Yugi Kawagushi, WHO's controversial director of planning and coordination and a close associate of Nakajima. Kawagushi has been managing large sums donated to WHO by another controversial Japanese figure, Ryolahi Sasakawa, who, too, is alleged to be a close associate of Nakajima. The John Bourn audit concluded that the six contracts had been allocated without any clear examination or heed to the costs. "We are preoccupied by the fact that the WHO has not ensured the projects approved were really justified and worthy of support before allocation," concludes the British audit report.

Meanwhile, while thanking the health ministers of various countries who had elected him, Nakajima promised to bring about necessary reforms, in particular more transparency in WHO management, warranted by all the criticism. But shortly after his election, he announced the creation of a new department of institutional affairs, under the direction of Kawagushi, who had been sacked from his earlier post a few weeks before the annual general assembly.

US under secretary for health Walter Brodnax, in a statement to the press, refused to overplay the American-European dissent towards Japan. "I just finished a very cordial lunch with my Japanese counterpart," he said, giving the lie to all rumours that USA would stop its aid to WHO. USA is WHO's single largest donor and provides $125 million out of an annual budget of $850 million. Japan's share is about $57 million.

In Geneva, USA's magnanimity is believed to be representative of the Western attitude, which is interpreted as a face-saving arrangement in Nakajima's favour. USA and Europe will not close their dollar taps and in return, Nakajima will resign from his post within a year or two.