...A lament for forest change at Sariska 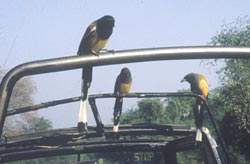 the impacts of large-scale destruction in forests are easily visible. But what does one observe when the disturbance is at a small scale? Birds. The Environmental Studies Group of the Delhi-based Council for Social Development did just that at Sarsika Tiger Reserve, Rajasthan. They have come up with interesting results at the end of the first phase of their study. The fieldwork was carried out between March to May 2003.

The results show that net species diversity and bird densities were same in disturbed and undisturbed areas, but species compositions in the two categories were significantly different. Species diversity is a measure of both the variety of species and the relative proportion of each kind in the entire community, while density indicates the total number of species of a taxon found at a site over the days a study was conducted. Finding out species composition, on the other hand, means paying more attention to identifying individuals (sub-species) than the number of species.

Species reacted to changes in the structure of the forest -- the Rufuous treepie and the Red-vented bulbul were impacted by change in the density of the forest under-story as well as the richness of tree species. The oriental magpie robin and the great tit reacted to alterations in the canopy cover.

Simple statistical studies proved there was a positive correlation between vegetation changes and bird species abundance. The bird community structure was found to be more disturbed in the date palm-dominated forests and mixed forests than the scrub forests.

The other revelation of the study was the effect of disturbance on the feeding guilds, which are groups of species that feed on similar kind of resources in the ecosystem. As compared to undisturbed forests, gramnivores (birds that eat seeds) were found more abundant than insectivores in disturbed habitat. The researchers suggest that the changes in bird community composition has to do with lack of food resources for species of birds having specialised eating habits.

Birds are central to plant regeneration and, therefore, are an important point in the ecological chain to catch hints of changes in forests that may occur over long periods due to disturbances.