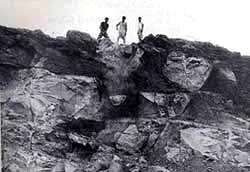 Non-governmental organisations have accused the Union ministry of environment and forests (MEF) of succumbing to pressure from the Rajasthan mining lobby and de-reserving a part of the Sariska National Park to allow mining. MEF reiterated the area of the park is 866 ha, 279 ha less than the previous figure of 1,145 ha set by the state government.

Says Arin Ghosh, director of MEF's Project Tiger, "We have only ascertained the actual area legally designated as reserve forest under the Supreme Court orders and we found this to be less than the area stated by the Rajasthan forest department."

In October last year, the Supreme Court had ordered a verification of the park's boundary after miners claimed that 208 mines should be reopened because they were located outside the sanctuary's boundary.