The cause and the effect 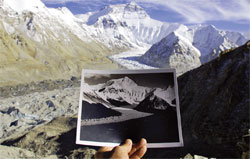 It was a rare attempt by around 30 photographers to show the cause and effect of climate change. Titled Coal+Ice, the show in September took up the entire space of China’s prestigious Three Shadows gallery.

It first took viewers to a section with prints documenting coal mining, mostly in China. Then came video projections of some of those prints and then a huge projection of glacier photographs taken by mountaineer-photographer David Breashears. He took those photographs across the Himalaya and Karakoram ranges from the exact points that mountaineers and surveyors had shot from decades ago. His pictures showed over 100 metres of Rongbuk Glacier melted in nine decades, leaving ice blocks.