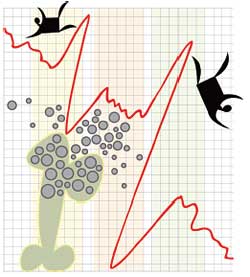 THE element that is a major constituent of blackboard chalk, teeth and bones is also the one that regulates almost every function a cell performs. Scientists recently traced diseases ranging from irregular heartbeats to strokes to mental disorders to this element's imbalance in a cell. The element is calcium.

Chemical imbalance in a cell stimulates the messenger protein IP3 to bind to another protein, IP3 receptor that is found attached to the endoplasmic reticulum (a network of vesicles and sacs involved in protein transport and storage of calcium) of the cell. This binding results in release of calcium and generation of signals which can lead to several diseases. For example, scientists of Babraham Institute in UK have attributed the increase of calcium ion concentration in the nucleus of the cells of heart muscles leads to abnormal thickening of heart muscles. Another study by the University of Liverpool in UK found that increase of calcium ion concentration in pancreatic cells leads to acute pancreatitis.

What puzzled scientists was how a simple molecule like calcium could lead to so many types of diseases. Researchers from the Department of Pharmacology, University of Cambridge, UK, found a crucial clue to this mystery. They found that the manner in which IP3 receptor releases calcium and calcium transmits signals, differs depending on the distribution of IP3 receptors in the cell.

The scientists went about finding out how the clustering works. As in the case of the road accident, the incident may either lead to just one or two people running to the spot or a crowd of people may be drawn to the scene. If the people are few in number, they would quietly ask passersby for help. The crowd, whereas, will be louder.

According to the paper published online in Nature on February 25, something similar happens with IP3 receptors. When a few receptors are stimulated they lead to release of a few calcium ions. When there is a cluster, their combined effort is bigger because the calcium they release stimulates more receptors to release more ions. This difference results in different diseases.

"The key significance of our paper is that it contradicts the notion of IP3 receptors existing as pre-formed clusters. It shows that IP3 receptor clusters are formed de novo and the process is triggered by IP3," said Taufiq-ur-Rahman, one of the study's authors.