Good and yet affordable technology for cars without sooty exhaust pipes spewing fumes is close at hand. Their future now hinges on a suitable battery 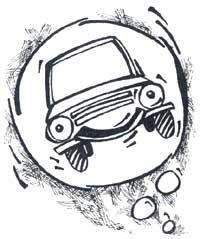 GREEN cars are winding their way to an era of less polluted Istreets. General Motors (GM), the world's largest automobile 'manufacturer, has announced 'that it would begin selling the Electric Vehicle (Ev) I electric motor cars in Los Angeles, San Diego, Phoenix and Tucon in the us from late 1997. It will be the first car in recent tirnes,to @have been specifically design@d by a big car-maker to run on electricity.

The Evi, under development since 1990, can accelerate to 96 kmph in 8.5 seconds and ultimately run at 128 kmph. It can seat only two people at a maximum travel range of 144 km in town, after which the car must be recharged. Given the fact that the average us commuter travels 71 km daily, each refill can take care of two days.The two-seater EvI will weigh 1,060 kg, 40 per cent of which consists of 26 lead- acid batteries. The contraption will cost us $35,000. GM is also producing an electric pick-up truck.

To help compensate its heavy weight, and to maximise the distance it can cover, the Evi will be equipped with low-rolling-resistance tyres, an aluminiurn chassis, a wind-cheating plastic skin and a regenerative braking system that helps to recapture energy that is normally lost when the brakes are applied.

EvI's owners will have two ways of recharging its batteries. Those without access to a 220-volt power supply (most American domestic circuits are 110 volts) will have to do it the hard, 15-hour way by plugging into a normal socket, in the boot (dickey). But the preferred method is more ingenious: use of a paddle-like contraption that is inserted into a 'small slot in the car's nose. This operates by induction, eliminating the risk of sparks that might ignite the hydrogen released during recharging. At 220 volts, the paddle can give an Ev1 the electrical equivalent of a full tank in three hours. It looks likely that the use of electric cars will have to await developments, in battery technology to replace the bulky lead-acid batteries of today.

Even recent variants such as lithium, nickel-metal hydride (NMH) or sodium sulphur batteries (being used by the Ford company in its Ecostar van) hold just a fraction of the energy in an equivalent weight of petrol or diesel. The search for better batteries has been going on for decades and manufacturers are yet to come up with anything viable and credible.

Several possibilities are being studied. GM seems to favour the NMH battery, which functions much like the n'ickle-cadmium (Nicad) batteries found in many domestic appliances. Early tests suggest that fitting NMH batteries to the Ev I could boost its range to more.than 250 km on a single charge.

In addition, NmH batteries, which do not rely on sulphuric acid as an electrolyte, are expected to last up to 10 years, whereas the Evl's'lead-acid batteries will have to be replaced every two to three years. The NMH, however, is difficult and expensive to manufacture. Energy Conversion Devices, a firm in Michigan, usA, has promised commercially viable NmH batteries by the end of 1997.

But the dominance of petrol and diesel is unlikely to be challenged, until new fuels, such as hydrogen, move from the test bench to the test track, or batteries become lighter and more powerful. Meanwhile, car-makers can continue to produce limited numbers of vehicles powered by alternative fuels, secure in the knowledge that their main business can roll on unchallenged.