The coast is not clear 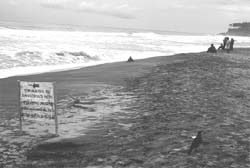 Almost 30 per cent of the land area of coastal ecosystems across the world has already been extensively altered or destroyed due to rising demands for housing, industry and recreation facilities, the report states. An estimated four out of every 10 people live within 100 kilometres of a coast. "Coastal populations are exploding and as they increase, pressures on coastal ecosystems will also multiply," concedes Lash.

wri scientists studied coastal zones around the globe, including the intertidal and subtidal areas on and above the continental shelf to a depth of 200 metres and adjacent lands. They analysed the condition of coastal areas, which they defined as the current and future capacity of the ecosystems that provide a wide range of goods and services needed or valued by humans. Both the quantity and quality of these goods and services in many areas have been severely affected, claim wri researchers.

Many fish populations are also declining. Overall, 75 per cent of fish stocks have either depleted or are being fished at their maximum biological limit. The wri also looked at these ecosystems' contributions to shoreline stabilisation, water quality, biodiversity and the tourism industry. The report states that growing erosion of beaches is affecting the tourism industry, particularly in island nations. In the Caribbean, for example, at least 70 per cent of beaches have eroded. Scientists researching on climate change assert that an increase in ocean temperatures could result in a sea-level rise of as much as 95 centimetres at the end of this century. "The resulting storms could intensify erosion, increase salinity of freshwater aquifers and coastal flooding," said Yumiko Kura, one of the authors of the report.

Emphasis is being laid on the protection of shorelines, especially in small countries and the ones with limited fertile land. In Japan, the government estimates that about 46 per cent of its shorelines need protection. It has already spent more than us $40 billion on this effort.

The report also warns that the destruction of coral reefs due to harmful fishing practices and mining has become a serious problem. Coral bleaching, which results from rising ocean temperatures caused by climate changes, is also increasing. In the last 50 years, as much as 85 per cent of the mangroves have been lost in Thailand, the Philippines, Pakistan, Panama and Mexico. Globally, about 50 per cent of mangrove forests have been destroyed.

Recent years have also seen an increase in pollution from inland sources and the loss of coastal habitats that filter pollution. This has led to the expansion of oxygen-depleted (dead) zones, such as those in the Gulf of Mexico. These areas are deadly to fish and other marine species. The incidences of harmful algal blooms along the us coastlines have also increased -- from 200 in the 1970s to 700 in the 1990s. Since 1991, these algal blooms have caused almost us $300 million damage in terms of fish kills, public health problems and loss in tourist revenue. More invasive or alien species are being found in coastal areas, often disrupting the foodchain and eliminating native species.

Scientists estimate that on any given day, as many as 3,000 different species are carried in the ballasts of the world's ocean fleet. Scientists have identified 480 invasive species in the Mediterranean, 89 in the Baltic Sea and 124 in the Australian waters.

"These indicators show that the world's coastal ecosystems are fast deteriorating. The challenge before us is to find ways to meet the needs of human development while protecting the coastal ecosystems that are one of the most important foundations of life," says Lash. wri recommends that more financial resources should be allocated for monitoring coastal ecosystems, studying their species, the services they provide and evolving ways to protect them.