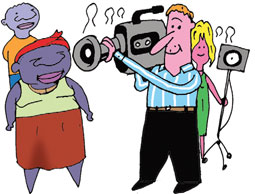 Non-profits in Namibia have accused the Swedish national TV station of "exploiting minority groups in Namibia" with its new reality show, The Great Journey. The show depicts three Swedish families who live with people from minority groups in Namibia, Vanuatu and Indonesia. In Namibia, they live with people from the Himba ethnic group. The show refers to the Himba people as "extremely primitive tribals" while the Swed-ish participants are called "the families". According to Legal Assistance Centre (lac) a coalition of ngos in Namibia, this smacks of colonial stereotypes.

lac which has the government mandate to approve any filming among Namibia's ethnic minorities has accused the show of violating conditions for filming among the Himba.As payment to the Himba participants in the show, the contract between the production company and those involved in the show only provides about a dollar and a few bags of mealie-meal and sugar. "This violates the condition to provide long-term benefits to the Himba people," an lac spokesperson said.