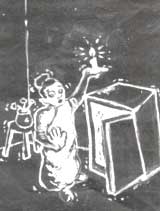 GADOLINIUM is one of the more obscure rare-earth elements. But it has a strange property that could prove useful: when put into a magnetic field, it heats up; when demagnetised, it cools down. Researchers at the Iowa State University in the us are using this effect to create a new principle in refrigerators by cooling them with magnets.

Most modern refrigerators function by circulating a fluid with a low boiling point through the freezer. Evaporation requires heat, and this heat is drawn in from the surroundings. By pumping the fluid into a freezer in such a way that it expands and evaporates, heat is 'sucked' out of the compartment. Condensation from vapour to liquid liberates heat. In a conventional refrigerator, condensation takes places in an external radiator, letting the heat from the fridge out into the room.

The new fridge also utilises a circulating fluid - water with a little antifreeze added. The cooling is done not by the expansion and compression of the fluid, but by the magnetisation and dernagnetisation of gadolinium. Two cylindrical 'beds' containing small gadolinium spheres are pushed out into the magnetic field in opposition to one another. As a bed enters the magnetic field, it heats up. The heat generated is allowed to dissipate into the environ- ment and the bed is then pushed out of the magnetic field. Deprived of magnetic stimulation, it cools down - cooling the water, which is then pumped around the freezer. While this is happening, the other bed in the magnetic field is heated. So far, the prototype Iowa fridge has run for more than four months without any problem.

Ultimately, like most refrigerators, it runs on electricity. Power is needed to move the bed and to keep the water circulating. But a commercial version may use significantly less electricity than a conventional fridge. No energy is lost in the expansion and compression of the working fluid, and the magnet that generates the field is based on a super-conductor and thus consumes negligible quantities of electricity. The maximum energy efficiency of a conventional fridge is about 40 per cent. Theoretically, the new can achieve 60 per cent efficiency.

Such a fridge is, however, still a few years away from being developed for industrial and domestic applications. The prototype is expensive. But if it proves commercially viable, it may be the coolest fridge around.