The curious case of pneumonia 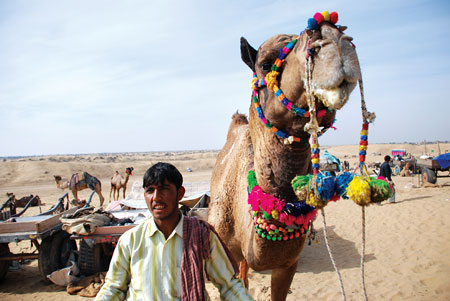 FOR the past two years Badaliya has been participating in a village camel fair, organised about 60 km from Bikaner in Rajasthan. But this January she did not. She was suffering from pneumonia, having fever and continuous nasal discharge of phlegm. Badaliya is not alone. The contagious disease has affected camels across Rajasthan.

Veterinarians of the state say they have never witnessed such an extensive spread of pneumonia among camels. “It is a strange situation. Camel is generally a robust animal. It does not fall prey to diseases easily,” commented R K Tanwar, director, clinics, Rajasthan University of Veterinary and Animal Sciences (RAJUVAS), Bikaner. “Earlier there used to be sporadic cases. But this time, the disease has affected 30-50 per cent of camels in the state, and new cases are being reported every week,” he said. There are 430,000 camels in Rajasthan, which is 60 per cent of India’s total camel population, as per the 2007 census.

The disease was first reported in November last year when about 12 camels died in the state’s Pali district and sporadic deaths occurred across Rajasthan. Veterinarians collected samples of nasal discharge of the affected camels. The culture examination showed presence of bacterium Pasturella haemolytica, said Tanwar. The bacteria are present in dormant stage in the lungs and pharynx of camels but under environmental stress like humidity they become active and cause pneumonia.

In 2010 Rajasthan received 28 per cent more than the average rainfall in the past 50 years, according to the state’s meteorological department. Although camels can adapt to extreme hot and cold conditions, “they could not adapt to this sudden change especially when the temperature dipped to -2°C in January this year”, said F C Tuteja, scientist at the National Research Centre on Camel (NRCC) in Bikaner.

Another reason for the spread of pneumonia could be that herders gave their own medicine, made of milk, millet, jaggery and ajwain (carom seeds), instead of contacting veterinarians, claimed Tuteja. “They were not interested in spending money on antibiotics,” he pointed out.

Others suspect that the last year’s Pushkar camel fair near Ajmer could be the source of the disease. Extreme cold followed a long spell of heavy rainfall during the fair, said Hanwant Singh, director of Lokhit Pashu Palak Sansthan, a non-profit in Sadri, Rajasthan. “Many pneumonia cases were seen at the fair,” he added.

RAJUVAS and NRCC have started administering antibiotics to the affected camels. “We are trying to treat as many affected camels as possible,” said N V Patil, director of NRCC. “However, it is difficult to tend to every camel as we depend on veterinarians to report the cases,” he added. Tanwar said it is vital to start the treatment of the disease as soon as it is identified. In later stages the nasal discharge becomes purulent, causing difficulty in breathing. Camels gradually become lethargic, just like Badaliya. “She was an active camel. But now she cannot carry any kind of load,” said her owner Bhanwar Lal. “It has been two months and she has not recovered,” he added.

In January, new pneumonia cases were reported in Rajasthan’s Jhunjhunu and Churu districts close to Haryana. About six camels died of pneumonia in December 2010 in Kachchh district of Gujarat.