The day of the con 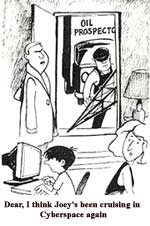 CON artists in the us have never had it so good. Now all they have to do to rob gullible citizens of their hardearned dollars is switch on their computers. There has been a deluge of financial scams all over the country ever since the high-tech electronic mail (E-mail) came into operation, say us press reports.

The much talked about "information superhighway" is being used as a medium to take "unwary investors for a ride," says Craig A Goettsch, president of the North American Securities Administrators' Association (NASAA). Swindlers use computer bulletin boards to flash tempting advertisements of unregistered stocks, phony oil releases, and bogus wireless cable partnerships. Because the familiar computer networks lend them a certain degree of credibility, lay information superhighway travellers are falling for them en masse.

The instantaneous communication offered by computers has made some scams, such as stock manipulation, far easier than before. For example, there is one particular scam cryptically named "pump and dump", in which the swindlers use computer hookups to hype stocks of tiny companies, thus pushing up the price. At that point the promoters sell and the rates go on a downward spiral as investors watch helplessly.

Unnerved by the growing number of scam cases, NASAA has issued an urgent warning to the public about the danger posed by investment scams and schemes in cyberspace. "What you see and read over the modem is no more likely to be true than a pitch you might get in the mail or hear over the phone," cautions Goettsch.

Consumers should not assume that on-line services police their bulletin hoards. Most do not, allowing the bulletin board operators to post whatever they want, says NASAA.