The Dead Sea is sinking 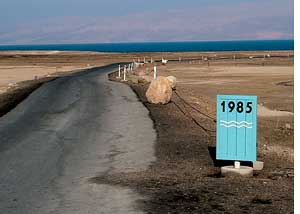 Human activity is drying up the briny lake

LIVING waters will go from Jerusalem... Its water will be healed and made fresh.

So go the biblical prophecies over the Dead Sea, a salt lake squeezed between Israel, Jordan and the Palestine territory of West Bank. Though the lake does not need to be made fresh, it needs immediate healing: this lowest point on earth, at 420.8 metres below sea level, is fast drying up.

Its low level and high salinity--its water is 11 times as salty as ocean water--have created a unique climatic condition that has attracted visitors for thousands of years. It also supplies a wide variety of products: from minerals such as potash, sodium chloride and magnesium to raw materials for skin care products. But in the last three decades, water level in the lake has dropped by 22 metres (m); its length has shrunk from 90 km in 1848 to 52 km now.

To replenish it, Dead Sea basin countries--the old foes--plan to bring water from the Mediterranean or the Red Sea. Policymakers favour the plan to transport 870 million cubic metres (mcm) of water a year from the nearby Red Sea (see box). A recent study by Shahrazad Abu Ghazleh and his colleagues from the Institute for Applied Geosciences in Germany, however, suggests this may not be enough.

Ghazleh and his team conducted the study to quantify the rate at which the Dead Sea is receding and find out reasons for it. They studied the size and volume of the lake during various stages of its recession and developed a mathematical model. They used data from the level records kept by the Israel Hydrological Survey, aerial photos by Royal Jordanian Geographical Centre, field surveys and topographical studies. They found the rate of recession has increased over the period: between 1932 and 1977, the water level dropped at 0.2 m a year, whereas between 1977 and 2007, it receded at 0.7 m a year. Thus, they concluded, the channel should carry 900 mcm of water a year. The findings were published in the online journal Naturwissenschaften on February 28.

As there has been little change in the region's weather pattern in the last century, any link between the lake's shrinkage and climate change was ruled out. "The lake's accelerated recession is due to intensive water consumption in the Dead Sea basin," the researchers said.

This is mostly because of water diversion projects in the upstream of the Jordan that have come up since the 1970s, said the researchers. There has also been a rush to tap the lake's mineral deposits. Industries draw water from the Dead Sea and vaporize it to extract the minerals, thereby depleting it.

Though the Dead Sea is not likely to disappear altogether, its recession will have detrimental consequences, the researchers said. As the waters recede, it causes an outflow of freshwater from surrounding aquifers towards the lake, depriving the parched region of its precious resource. The outflowing freshwater also dissolves the subterranean salt, destabilizing the soil and creating sinkholes. A number of sinkholes have already appeared along the shoreline, risking bridges and roads. Due to sinking water level, industries that extract minerals from the lake will have to bear higher pumping costs. Tourists, who mostly visit the region for therapeutic properties of the Dead Sea water will also have difficulty accessing the seawater. This will affect the tourism industry.