The direction of time

The universe is not symmetrical when it comes to time 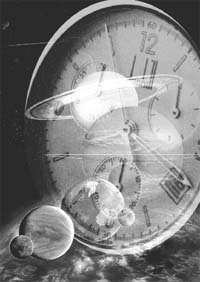 the nature of time has puzzled scientists and philosophers for centuries. Is the universe symmetrical with respect to time or is there a preferred direction of time? Now, this question is closer to an answer with two experiments in Geneva and Illinois reporting clear evidence that the world is not symmetrical with respect to. Indeed, it does matter which direction the arrow of time takes.

Time has always been a special variable in physics. Though relativity tells us that space and time are intimately linked, yet there are fundamental differences. For instance, we can compare observations taken with the experiment aligned in two different directions in space but it is not possible to compare results of experiments with two directions of time. Even then, time reversal is usually taken to be given in the ordinary world.

In physics, the mathematical operation of replacing the expression for time with its negative in formulae or equations -- so that they describe an event in which time runs backward or all the motions are reversed -- is called time reversal. A resultant formula or equation that remains unchanged by this operation is said to be time-reversal invariant. This implies that the same laws of physics apply equally well in both situations, that the second event is indistinguishable from the original, and that the flow of time does not have any naturally preferred direction in the case of fundamental interactions. A motion picture of two billiard balls colliding, for example, can be run forward or backward with no clue to the proper time direction of the event.

However, things are different in the microscopic world of sub-atomic particles. Since 1964, it has been known that some of the processes are not invariant under time reversal. Curiously, these only involve one kind of particle called kaon. A kaon is a particle made up of a down quark and an antistrange quark. (Quarks are subatomic particles believed to be among the fundamental constituents of all matter -- they do not possess any structure. There are six kinds of quarks: up, down, strange, charm, top and bottom.) Similarly, the antikaon is made up of an antidown quark and a strange quark. By a peculiar mechanism, these kaons and antikaons mix with each other, that is, a beam of kaons changes into a mixture of kaons and antikaons as time passes.

Now in a universe with time reversal symmetry, a beam of kaons should evolve into a mixture containing exactly equal amounts of kaons and antikaons, regardless of the way in which the initial kaons were produced. But in 1964, it was discovered that this is not the case and there is a small excess of matter over antimatter. The two experiments now report a convincing evidence of this phenomenon.

The experiment carried out at the cern laboratory in Geneva produced kaons and antikaons by the collision of protons and antiprotons. The kaons and their antiparticles thus produced decay after some time, and the decayed products were identified. This revealed the amount of the two particles present in the decaying state. The researchers observed about 1.3 million events in which the kaon changed to a mixture of antikaon and kaon. They confirmed that the chances of an antiparticle changing into a particle is greater by about 0.6 per cent. A research group at Fermilab, Illinois, usa , has also concluded that the time reversal symmetry is indeed broken.

In the next few years, several experiments are being planned at Stanford and in Japan to measure this effect in other sub-atomic systems. If the results are confirmed in these systems, then it will be clear that nature does indeed distinguish between the direction of time. The universe is not indifferent to the way the universal clock ticks.