The discerning eye of the insect

How do pests select which plants to attack in the field? By smelling odours plants emit, believe most entomologists. But now an alternative theory has emerged of plant-pest relation. It isn't the odour. Rather, bugs are driven to plants by visual clues and, largely, leaf colour 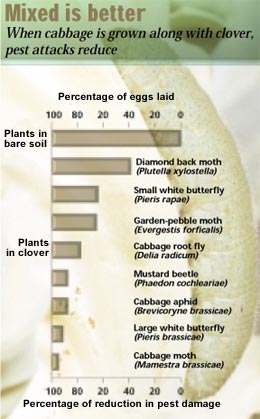 How do pests select which plants to attack in the field? By smelling odours plants emit, believe most entomologists. And an entire industry of pesticides has evolved around this principle, to ensure pests can't get that appetising whiff of the plant they want; insecticides are made to confuse them. But now an alternative theory has emerged of plant-pest relation. It isn't the odour. Rather, bugs are driven to plants by visual clues and, largely, leaf colour.

At present we use about 30 of 2,50,000 plant species to produce 95 per cent of our food. And each of these plants has secondary plant compounds that give rise to odours characteristic of the species. This could have led entomologists to believe that smell alone is what matters. All scientific research along the lines of this thesis has assumed that insects have developed highly specialised skills and and so can, with incredibe success, detect mates, food and host-plants. But this new hypothesis, by Stan Finch and Rosemary Collier of Horticulture Research International, uk, believes that the bugs' efficiency instead arises out of keeping things simpler, much simpler than the more than 45 books and 6,000 scientific papers published to corroborate the smell-thesis would have us believe.
The authors got their initial clues from the knowledge that insects can be prevented from finding their host plants if other plants are grown alongside. This, many believed, was not true in case of all species but only a few which had very specific hosts to prey upon. Some researchers believed that non-host plants worked as camouflage, hiding the host plant leaves or simply obstructing insects on the prowl. Others suggested that odours given off by non-host plants masked that of the host plants. Another hypothesis was that the host plants took up the chemicals released into the soil but the non-host plants and these chemicals altered the odour profile of the plant, rendering it unrecognisable.

But Finch and Collier have now developed this new thesis based on the fact that herbivorous insects land indiscriminately on green surfaces.

They have shown that the host-plant relation works in several phases. First, the insect, stimulated by the odour, lands on any green surface avoiding any brown surface (stem, or soil). Those insects that land on inappropriate leaves (non-host leaves) fly off again to repeat the process or simply leave the area. In the second phase, the insect makes a few flights around the host plant from leaf to leaf to assess its potential as appropriate homestead. To be successful the insect must make a certain percentage of successful landings in the second phase before it decides to lay its eggs. In plants grown as monocultures the insects zing in on the same plant, but in a mixed cropping pattern they often land up on other plants -- in which case the process is terminated and the insect begins its search for the right host all over again.

Finch believes that simply the number of other green surfaces within the insect's range of vision, shortly before it lands, is of essence in the host-pest relation. This, he and the co-author believe, is why insects are unable to decimate the same plants growing in the wild and why it is easy for insects to damage single-plant fields (non-mixed farming) so decidedly (see graph: Mixed is better). Undersowing, Finch believes, or companion planting like growing clover along with cabbage, could effectively manage pests -- something farmers know by experience.