A mysterious outburst of methane from the ocean's floor may have 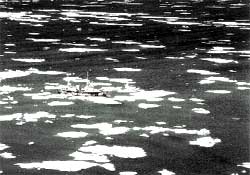 fifty five million years ago, one trillion tonnes of methane suddenly burst out of the ocean, shooting up the temperatures and killing thousands of species in the ocean depths. The first evidence of this prehistoric event was unearthed by researchers in 1991. But they were not sure of the causes that led to such an extraordinary outburst. Now scientists have started understanding the mystery behind the outburst. They say that the Earth can create dramatic climate changes, without human interference ( New Scientist , Vol 158, No 2132).

To unravel the mystery, researchers drilled a 2,100-metre hole into the Maud Rise, a submarine ridge beneath the Weddell Sea off Antarctica. G eologists James Kennett from the University of California at Santa Barbara, usa , and Lowell Stott of the University of Southern California, Los Angeles, usa, examined the sediment removed from the hole. They found evidence of a sudden mass extinction of organisms living on the sea-floor at the end of the Palaeocene era. Nearly half to two-thirds of all animals on the sea-floor had vanished within 1,000 years.

Earlier studies had shown similar extinctions in marine sediments in the Caribbean and European region during the same period. Kennett and his colleague say that it was a global event -- the largest extinction of species in the past 90 million years. However, it did not have much of an impact on marine organisms at the surface, or plants and animals on land.

The geologists opine that the burst of methane from sea-floor might not have been due to collision of an asteroid with the Earth. It is believed that a big asteroid that hit the Earth led to extinction of dinosaurs 65 million years ago. The study shows that a dramatic disturbance altered the chemistry of planet's biosphere 55 million years ago.

The researchers believe that a subterranean source, such as carbon dioxide ( co 2 ) from volcanic eruptions or hydrothemal vents, was a possibility. However, Jerry Dickens of James Cook University in Townsville, Australia, had ruled this out. He calculated that if co 2 in the Earth's mantle at that time contained a proportion of carbon similar to today's levels, the annual volcanic eruption rate would have been increased by nearly hundred times the average rate over the past billion years. Dickens says that such high rates are not possible if the geological record is taken into consideration.

This shows that co 2 was not the source of carbon. Instead it could have been methane. When researchers started investigating the mystery, they suggested that wetlands were the source for this methane. Jim Zachos and Lisa Cirbus Sloan of the University of Michigan, Ann Arbor, usa , had estimated that by the end of the Palaeocene era there were three times as many swamps and wetlands generating methane as today.

However, Dickens is not convinced of this argument. He says that the real source may have been larger reservoir rates. These are crystalline lattices of water molecules encasing methane gas. Though these are stable and confined by high pressure and low temperature, release of pressure or increase in temperature can release large amounts of methane.

Estimates show that methane hydrates are present in large quantities in permafrost and marine sediments. Bacteria present in the mud generate methane. Large reservoirs of methane hydrates are present in the top few hundred metres of sediment on the floors of all the oceans. This region is just beyond the edge of continental shelves, according to seismic surveys. It is also believed that many such structures trap even larger stores of gaseous methane.

It is interesting to note that methane leaks from hydrate lattices have been blamed for oilwell blowouts and even mysterious disappearance of ships and planes in the Bermuda Triangle. According to Dickens estimates nearly 1 to 10 trillion tonnes of methane are tied up today inside the hydrates. Theoretically, it is said that this gas can be released quickly.

Fossil records collected by Dickens show that warming of the deep ocean would have heated the sediments enough to release about trillion tonnes of methane. If this much gas is released, it can lead to global shift in carbon isotopes.

If a methane outburst 55 million years ago transformed our planet, what released it? Several researchers believe that something caused the water in the ocean depths to warm up, destabilising the methane hydrates and triggering the release. And the probable cause of this deep warming is a sudden change in ocean circulation patterns.

It is known that the ocean's circulation system is driven from a small number of places at the surface where water becomes unusually saline. This super-saline water is denser than the surrounding water and sinks, often right to the ocean floor. It seems that this phenomenon might have occurred in polar regions such as the North Atlantic and around Antarctica.

In this region, seawater freezes to form ice caps. And the water that remains becomes increasingly salty. Once it has sunk, the water takes a thousand-year circuit through the ocean depths before surfacing again.

Dickens thinks this system broke down 55 million years ago, allowing warmer water from middle or tropical latitudes to penetrate the ocean depths. Even without methane, the Earth had been warming relatively rapidly over the previous several million years. And at some point, something snapped leading to such an extraordinary outburst, says Dickens.