The ecological cost of air travel 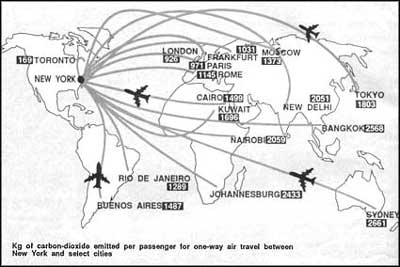 ABOUT 176 million tonnes (mt) of aviation fuel was burnt in 1990 -- 14 per cent of the world's consumption of transportation fuel. This air traffic fuel produced about 550 mt of carbon dioxide, 220 mt of water, and 3.5 mt of nitrogen oxides.

Dean Abrahamson of the University of Minnesota has calculated what this means in terms of emissions per trip made. A return trip from New York to New Delhi emits 4.1 tonnes of carbon dioxide per passenger. This is equivalent to 1.12 tonnes of carbon -- the average amount of carbon emitted worldwide by a person through the burning of fossil fuels every year.

In India, a return Bombay-Delhi flight would release 0.11 tonnes of carbon per passenger. A return Delhi-Madras trip would emit 0.16 tonnes and a return Delhi-Calcutta trip 0.12 tonnes.If everyone had an equal quota of carbon dioxide emissions, every high flier would be making trips on borrowed quotas.

An enormous amount of air travel takes place for leisure and fun. A recent British government report shows that 78 per cent of air trips originating in a year in the UK are for leisure .