The enigma of inertia 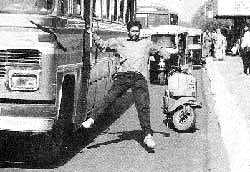 A SMOOTHLY moving bus suddenly comes to a screeching halt and you are jerked forward. You purple the air around the driver with invectives as you recover from the jolt. But if you remember your physics lessons well, you'll know that the driver isn't to blame. Inertia, or the tendency of a stationary body to stay put in one place, and a moving object to keep moving in the absence of a countering external force, was behind the jerk (Science, Vol 263, No 5147).

Nobody knows why inertia works the way it does. Most physicists take it for granted that inertia is intrinsic to matter. Since the concept was first aired by Galileo in the 17th century, some scientists have tried to prove differently, but no luck.

Now three US physicists claim to have unearthed the source of this enigma. According to them, inertia comes from the buzz of activity that is found in apparently empty spaces and even in vacuum, where subatomic particles are being created and destroyed in the blink of an eye.

Bernard Haisch of the California-based Lockheed Palo Alto Research Laboratory, Alfonso Rueda of California State University at Long Beach, and Hal Puthoff of the Institute of Advanced Studies at Austin, Texas, argue that inertia results from a Lorentz force -- the force that deflects a charged particle moving through a magnetic field. The disturbance in the vacuum produces the magnetic field and the charged subatomic particles making up the object feel the Lorentz force, they say. The larger the object, the more particles it contains. Thus the resistance is stronger and the object's inertia greater.

The controversial idea gives rise to a more provocative thought: that inertia, once understood, might possibly be controlled. Their claim will soon be supported by hard evidence from experiments that will search for changes in the mass of electrons when they are exposed to powerful laser beams, the trio say.