As efforts to control the fires that have ravaged jungles and grasslands in Central America fail miserably, the misery mounts 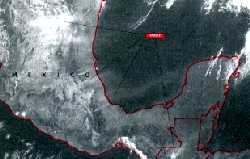 the most devastating wildfires in seven decades raged across Mexico and other countries in Central and South America, gobbling millions of acres of forests and grasslands, and forcing closure of international airports. Blankets of smoke from these fires pushed into the us as far as Texas, Oklahoma, Wisconsin and Georgia counties.

The smoke forced government officials in Mexico and Texas to declare health emergencies, and was blamed for an aeroplane crash in the second week of May in Guatemala, in which three persons died. In Mexico at least 50 people died battling the blazes.

The fires, which are burning across the region from Nicaragua north through El Salvador, Honduras, Guate-mala and throughout Mexico, are threatening the centuries-old Mayan ruins in Guatemala and have incinerated monkeys, birds and rare plants in some of Mexico's most fragile biospheres.

The fires have been burning for months but, fed by an El Nio-driven drought, have intensified recently, overwhelming Mexican fire-fighting efforts. In northeastern Brazil, fears of famine loomed large as drought conditions worsened.

Critics said a sluggish government response is also partly to blame. "It's a national disaster," said Homero Aridjis, one of Mexico's most outspoken environmentalists. "If the fires have broken all previous records, the incompetence of the Mexican authorities also has broken all records."

Government sources in Mexico blamed everyone from peasants to drug traffickers and careless cigarette-pitching motorists for contributing to the fires. By mid-May, the pall had covered much of Mexico and wrapped the already-polluted capital in a shroud of grey-brown smog.

A hazy veil in the second week of May spread east in the us to Florida and Georgia and north to Oklahoma, Missouri and Wisconsin, according to Jeff McQueen of the National Oceanic and Atmospheric Administration Air Resources Lab in Silver-Spring, Colorado, which had been tracking the smoke's path.

A seven-member team of experts was sent to Mexico to assess the situation by the state authorities. However, the team was grounded in Oaxaca - where some of the worst fires were burning - because the smoke was too thick for reconnaissance planes to negotiate, according to a us Embassy spokesperson.

The fires have followed much the same pattern as those that devoured farmlands across Southeast Asia in 1997 and sent smoke billowing hundreds of miles to Malaysia, Japan, Singapore and Thailand.

More than 700,000 acres of national forests, fragile jungle, grassland and farmland have been consumed by fire this year in Mexico, according to Mexico's environment ministry. In Guatemala, Honduras and Nica-ragua, an estimated 3,455 sq km have burned up.

After dispatching an estimated 30,000 soldiers and fire-fighters to battle 10,656 fires thus far this year, Mexican president Ernesto Zedillo could offer little in the way of ending the blazes, except "hope" that the fires would be extinguished soon.

But with Mexico's scarce fire--fighting resources stretched beyond their limits, many of the fires are being fought by primitive means. In the central state of Michoacan, for example, 100 villagers attempted to save a forest that is part of the winter ground of the monarch butterfly by hauling buckets of water two hours from their village.

Mexico's driest and poorest states - Chiapas, Oaxaca and Guerrero, where farmers routinely clear their land for planting by burning last year's stubble - have become infernos where motorists use headlights throughout the day to see through the dense smoke.

As in many developing nations, farmers, developers and loggers in Mexico and its Central American neighbours use slash-and-burn techniques to clear land. Although the practice is illegal in Mexico, authorities rarely prosecute offenders.

The illegal burning, combined with one of the worst droughts and some of the highest temperatures of this century, has resulted in what one newspaper here headlined 'The Year of the Fire.'

According to Reforma, a Mexico City newspaper, Mexican prosecutors have initiated only 109 investigations of the more than 10,000 fires recorded this year.