Were the Neandertals our ancestors or a different species? Experts have unearthed intriguing aspects of the lives of these intelligent and compassionate creatures 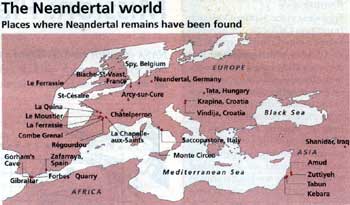 THE study of Neandertal bones discovered in the Vindija Cave, Croatia, in the '70s has provided important clues about the lives of these hunter-gatherers, who occupied this cave some 50,000 years ago. The first Neandertal fossils were named after Neaderthal or Neander Valley in Germany, where they were discovered in 1856. (The silent W in that has been dropped in mpderin German). Fine cut marks and unusual fractures - similar to those made on the bones of butchered animals - hint that the Neandertals practised cannibalism, either due to hunger or as some kind of death ritual. But discoveries at other Croatian caves suggest a more compassionate side to the Neandertals. A skull fragment found at a nearby Neandertal rock shelter shows evidence of a serious head injury that had healed. Someone had nursed the victim for a long time (National Geographic, Vol 189, No 1).
Neandertal faces are marked by broad noses and thick browridges over their eyes. The strong chins and high foreheads of modern humans are missing. Instead, their skulls slope back low over their brains. Beneath their eyes, their faces protrude forward, making their cheekbones angle to the side rather than facing the front, as ours do.

In the past, the Neandertals were presumed to be @wkward subhumans who lacked the anatomical or the intellectual ability to speak. They left hardly any signs of creative art. Their toolmaking skills seemed primitive. However, recent excavations and analysis have proved that Neandertal tools required a high level of craftsmanship and mental skills as sharp as modern humans. They deftly shaped pieces of flint into knives, scrapers, points and blades. They organised group hunts and took care of the sick, which suggests a social organisation more complex than previously believed. "Neandertals were highly resourceful, highly intelligent creatures," says Fred Smith, a Neandertal specialist at Northern Illinois University, us.

A hand axe found in the Vezere valley of southwest France could have served as a multipurpose tool. Different edges of it were used for different purposes like cutting, butchering, scraping, defleshing. Making such tools would not have been possible without some kind of communication or exchange of information among the Neandertals.

There has been much debate on whether the Neandertals had the anatomical equipment for speech. In modern humans, the voice box hangs from the hyoid bone. In 1983, an intact hyoid bone was discovered in a 60,000-year- old Neandertal skeleton excavated from a cave called Kebara in Israel. But did they have a language to store information and pass it on? It is generally accepted by scholars that Neandertals spoke some kind of elementary language.

The origin of the Neandertals is uncertain, but scientists suspect that th@y share a common ancestor with modern humans: a tall, slender species kilown as Homo erectus, which migrated into Europe probably from Africa through western Asia between 700,000 and a million years ago.

The Neandertals had to adapt to the harsh and cold climate to survive. Like the arctic dwellers of today, they had short limbs and stocky bodies. Their strong physique enabled them to over- power big game, such as bison or elk. Generally, they had larger brains than modern day humans. Some experts speculate that Neandertals required more brain cells to coordinate their extra body mass.

These Neandertal traits probably began emerging between 230,000 and 300,000 years ago. Evidence of their antiquity has recently been discovered on the muddy floor of a cave in the Sierra de Atapuerca of northern Spain.
Hundreds of animal bones and the remains of more than 30 Neandertals have been found in test pits in the Sierra de Atapuerca. It is a mystery why so many bones lie clustered here. May be the cave was a favourite eating spot for predators. But Juan-Luis Asaragua and his team from the Complutensian University of Madrid in Spain have offered a more intriguing possibility. According to them, the Neandertals inhabited the entrance to the cave and since corpses smell, they disposed of the bodies by dropping them down the pit. Unlike animals who do not take care of their dead, these people gave their dead special treatment. This throws some light on how their minds had evolved.

Two partial Neandertal skulls alongwith hundreds of flint tools and animal bones were unearthed in 1976, at Biache-Saint-Vaast in northern France. Alain Tuffreau, an archeologist at the University of Science and Technology of Lille, France, says such slaughters hint at their more advanced faculties.

"By 125,000 years ago they had become formidable hunters as well as gatherers of edible plants, shellfish and small reptiles," says Mary Stiner, an archaeologist at the University of Arizona, us, who researched with her husband Steven Kuhn. But the Neandertals did not possess sophisticated weapons; they had to kill through cooperation. According to Kuhn, a wooden spear that probably had a sharp stone point was used for killing. A wooden spear nearly eight feet long was found among the bones of a fossil elephant discovered in 1948, in a swamp in Germany.

Besides hunting, the Neandertals practised other forms of cooperation. They formed close social groups, as a collection of skeletons from a cave called Shanidar in Iraq poignantly illustrates. There, around 100,000 years ago, a man, two women and an infant were buried together. Excavators found the pollen of early spring wildflowers in the soil around the corpse.

"I think the flowers were set around them by the rest of their social group. That suggests that they were thinking and caring about their dead" says Erik Trinkaus. At Atapuerca, the Neandertals' ancestors left no evidence that they had felt such emotions. Perhaps the later Neandertals were emotionally developed like us to feel the void in their hearts. The Shanidar cave dwellers showed evidence that crippled members of the group were fed, protected, and helped to move by others, thus heralding the dawn of empathy.

In the '80s, scientists found the remains of modern humans who lived in the Middle East at least 90,000 years ago. Perhaps the Neandertals and modern humans existed side by side for tens of thousands of years. Around 40,000 years ago, modern humans came to Europe, previously the exclusive domain of the Neandertals. They survived the glacial cold as they were equipped with better shelters, tailored clothing and more efficient hearths. Nineteenth century scientists named these newcomers the Cro-Magnon people.

Speculations abound on why the Neandertals disappeared. No record of Neandertal life is available from about 10,000 years after their arrival. Perhaps they were conquered and destroyed by modern humans. Perhaps the new- comers introduced deadly new diseases. They might have interbred with modern humans. Or may be, they slowly died off, unable to compete with the more adaptable moderns.

Confrontations between the two could have led to the extinction of the Neandertals. Many scientists, such as Fred Smith, see a more gradual replacement - not by people but by modern genes that spread around the world like virus, slowly transforming populations. 4 Some bones at Vindija appear slightly @@more slender and graceful than the classic Neandertal bones. Could the modern Europeans be the descendents of the Cro-Magnons and the Neandertals? "Neandertal genes persist in modern ',,Europeans today," insists Milford Wolpoff, a p aleoanthro polo gist from the University of Michigan. Others disagree. They were a different species," argues Fred Spoor of University College, London.

According to Jean-Jacques Hublin, the Neandertals may have been forced to flee south into Spain due to falling temperatures around 35,000 years ago, and found the last refuge in the Rock of Gibralter dotted by 140 caves. Evidently, they never moved on across the strait even though Africa lies only a few miles away.

Did they lack curiosity? Perhaps that marked them out from humans who are driven by curiosity to explore. May be they simply gave in to the adversities of that period without any resistance. Nobody knows. All that we know is that the Neandertals survived daunting challenges for more than 200,000 years.