Threat to fish due to dams quantified in Mekong basin 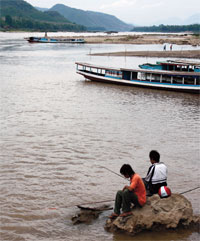 THE Mekong River, which flows through China, Myanmar, Laos, Thailand, Cambodia and Vietnam, is already heavily dammed owing to its steep topography. Plans are to construct 11 more on the river and 41 on its tributaries in the next four years. Another 10-37 dams are planned on the tributaries between 2015 and 2030.

But construction of dams on the tributaries could drastically alter fish ecology, habitat and block migration routes, a study published in the March 5 issue of PNAS states. “Avoiding dams on main the rivers is currently the main focus of international non-profits like the International Rivers and WWF. But no attention is given to dams on the tributaries,” says Guy Ziv, lead researcher from the Princeton University, New Jersey, US.

A treaty between Laos, Cambodia, Vietnam and Thailand led to the formation of the Mekong River Commission in 1995 to manage development projects on the mainstream river. However, if countries want to dam tributaries, they can do so merely by notifying the other countries. The study points out how this loophole in the agreement can affect the fishing communities of Cambodia and Vietnam.

Ziv studied the impact of 27 of these dams. Using a simple fish migration model, the author evaluated the effect of each dam on fish productivity. They found a dam being built in the Lower Se San in Cambodia alone would cause a 9.3 per cent drop in fish biomass in the Mekong basin. According to the model, in 2015, 80 fish species will be considered “vulnerable” as a consequence of the 41 proposed dams. However, with 37 more dams by 2030, the corresponding loss of fish migration paths will result in 103 fish species becoming “critically endangered”.

Though individual dams might affect small percentages of fish, the impact will compound when dams all over the basin are taken into consideration, the author notes in the paper. He also found that losses in fish diversity will increase by 51 per cent if dams in the tributary were constructed. One per cent loss in fish biodiversity means a loss of 10,000 tonnes of fish. Instead construction of dams in the upper reaches would generate the same electricity with lower ecological consequences, Ziv adds.

“This tool can tell you what dams to build for a required energy production without affecting fish ecology,” says Ziv. The effect on fish diversity can be minimised if only a few dams that together produce not more than 14 terawatt-hours of power per year are built, he adds.

India too at risk

The scenario is almost the same in India. “Around 550 schemes have been planned with a total capacity of 120,000 MW,” informs Mahendra Lodhi, scientist with G B Pant Institute of Himalayan Environment and Development in Uttarakhand. “Diverting river water through tunnels is insufficient to support aquatic flora and fauna, especially in non-monsoon seasons, he adds. “Moreover, some of the fish species in Himalayan rivers migrate upstream for egg-laying but these hydropower dams become a hurdle,” Lodhi notes.

Reviewing the study, Vidyadhar Atkore, a researcher at ATREE, a non-profit based in Bengaluru, says, “Many studies from the developed world have assessed impacts of dams on aquatic biodiversity but few studies have analysed the direct impact of hydropower projects on riverine diversity in developing countries.” The paper fills the gap, Atkore who is studying the effect of hydrological modification on native fish species, adds. Similar attempts are required in India, since a number of hydropower projects are being built in the Western Ghats and northeast Himalayan region. Construction of dams has already affected the migratory routes of the Himalayan Mahseer as well as resulted in loss of its wintering grounds in the Yamuna, the Ganga and the Sharda.