Will the targets set for utilising flyash by power plants be met? 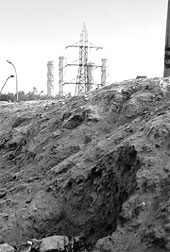 to legislate is one thing, to regulate another -- this adage seems to have been proven again in the case of the 1999 flyash notification of the Union ministry of environment and forests (mef). Back in 1999 the mef had notified that by September 2002 old power plants should be able to show 20 per cent flyash utilisation and new power plants 30 per cent utilisation of flyash. Further it mandated that manufacture of clay bricks or tiles or blocks for use in construction activities could not be done within 50-kilometre radius of thermal power plants without mixing at least 25 percent of flyash.

Three years down the line, despite about 55 demonstrations pilot project and numerous agencies working on effective utilisation of flyash the targets fixed in the notification remain far from achieved. "We talk of space missions but are yet to implement an effective project to use flyash," says one senior personnel in a power plant who deals in ash utilisation but does not want to be named for obvious reasons.

Tall claims of various institute and government bodies on fly ash utilisation seem to belie themselves when one visits Sonbhadra district of Uttar Pradesh which is also referred to as power capital of India owing to many power plants situated here. Officers of power plants like that of the National Thermal power Corporation (ntpc) say that they have not been able to achieve anything beyond 14 per cent utilisation. They candidly admit that they have repeatedly told the regulatory authorities about their inability in achieving the stated target.

Currently, 90 million tonnes of flyash is being generated annually in India. With a planned increase in coal-based power plants in coming years this figure is expected to reach 200 million by 2012. Already 65,000 acres of land is used as ash ponds -- land where fly ash is dumped by thermal power plants.

A fly ash utilisation estimate says that only about 12 million tonnes or 13 percent of the flyash generated is being utilised in India. The potential use, in comparison is quite high. Though the situation is far better than in the 1980s when the utilisation was as low as three per cent.
Utilisation of fly ash depends upon its use in development projects undertaken in proximity to the power plants in question. For instance, whereas Delhi-based power plants are privileged enough to have infrastructure development projects close by to supply their flyash, power plants in Sonbhadra area do not have the same optio ns. "What happens once these one-off development projects are over?" asks R Krishnamurthy, head of the ash utilisation division at ntpc's corporate office at New Delhi. Another coullegue of Krishnamurthy says if all stakeholders -- the power plants, the flyash contractors and users do not take on the problem in a cohesive fashion the only solution left could be to closer power plants.

Though H D Pandey, also in ash utilisation division of ntpc claims that target set under the notification will be achieved, he has no plans to share. The Renupower plant at Renusagar, Uttar pradesh privately owned by the Aditya Birla group with daily ash production of around 5,000 tonnes and ntpc, Shaktinagar with about 8,000-9,000 tonnes per day production also claim that 20 per cent target will be achieved by September 2002. But like their counterparts, cannot explain how they will do it.
Some difficulty in achieving the target, Pandey says, lies in getting brick manufacturers to use fly ash. Government notification stresses upon all clay brick manufacturers to mix at least 25 per cent ash in clay for brick making. But many, even today, refuse to deviate from traditional brick making. "Not many clay brick manufacturers have approached us for flyash in last three years" says Pandey. He explains that the brick kiln contractors prefer clay, as they do not have to pay any royalty on amounts of soil dug out, also the process of making bricks asks for more training and greater technical know-how in the hands of the kiln workers -- something which is missing right now. Why then would they spend on transporting flyash from long distances, asks Pandey. Also, the economics of 'fal-g' bricks -- which use high percentage of flyash -- is yet not in its favour in many places. There is no existing market and no effort on part of the government bodies to make one, says Pandey. In his opinion the government should completely ban the manufacture of clay brick around power plants. He accuses the brick manufacturers' associations of having pressurised the government to change the draft notification that had earlier recommended exactly this.

The other sector that utilises, rather should be utilising flyash is the buildings and road infrastructure projects. Here too the off-take of flyash remains at an abysmal low. A few highways, flyovers or expressways here or there make for little use of flyash. Some power plants in Sonbhadra also use ash to fill up low-lying areas where construction is to occur. But the use here remains limited and sporadic. Although the government has specified that flyash should be used in constructing roads and embankments, large user groups -- like highway authority and the central public works department -- hardly consider using flyash. Consider this: when asked about the flyash utilisation by his department, R M Gupta, superintending engineer of Public Works Depratment at Robertsganj in Sonbhadra district of Uttar Pradesh betrays his ignorance of the notification. "About 20 years back I had received a paper from government mentioning use of fly ash in road construction," is all he can recollect.

Another problem is of dissemination of information among the stakeholders. Experts say that the disinterest of these government bodies undertaking building work could easily be countered by making it mandatory for them to file reports on annual consumption of flyash in the their projects. As per the notification all these users had to incorporate flyash utilisation in their schedules within four month but till date only a few have done so.


The cement companies are the other big consumers of flyash. In the Pozzolona Portland Cement (ppc) about 25-30 of the content is flyash. For the cement companies it makes for great financial savings. They save on raw material costs alone by about 25-30 per cent besides additional savings in operation and maintenance related costs. Cement companies choose power plants to lift ash from on depending upon their transportation movement. This ensures that trucks already in use to cart other materials are utilised to get flyash. Often it makes business sense for some cement manufacturers to get flyash from afar rather than from the nearest thermal power plant -- who then are left without any takers for their flyash.

And, even though the cement industry is beginning to utilise flyash more and more, the consumption by the industry will only increase if the market for ppc grows along with its acceptability. An officer of ntpc's Shaktinagar office says that government should actively promote ppc in place of opc. As an example he said that the whole Katni, Satna and Renwa belt in madhya Pradesh produce about 12 million tonnes per annum cement and if there is full grown market of ppc then this region can itself consume about two million tonnes of fly ash every year. With more cement companies setting up fly ash based PPC plant, power plants are expecting demand for this product, which will obviously increase flyash utilisation.


But power industry experts think that the three sectors -- brick kilns, cement and building infrastructure -- alone cannot take care of the ever-growing production of flyash. All these measures can consume ash to a reasonable extent but only at a gradual pace as market develops. Pandey believes, mine filling is the best solution to the problem of flyash disposal. In mine filling ash is dumped in abandoned coalmines. "Government should seriously think of leasing mines to thermal power plants," says official at the Renupower plant at Sonbhadra. Even one mine can be sufficient for the whole working life of ntpc at Shaktinagar, says its official who looks after fly ash utilisation at the plant.

Stakeholders may have varying opinion on numerous issues, but they converge to agree that two things that are imperative if the notification targets are ever to be met. One, as Ramesh Kher of ntpc's ash utilisation division, puts it: create a market for flyash. India does not lack research and development or policy measures, but there is a lack of effective enforcement. "Demonstration technologies will be successful when market is developed for their consumption -- we do not have a market yet." Two, create a regulatory regime that makes business sense. Unless all stakeholders participate and it makes business sense for them to do so, the notification will remain a dud.