The fracas over Apple logo 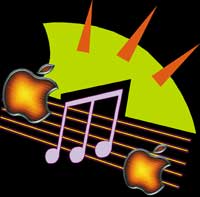 Apple Computer Inc. is entitled to use the apple logo on its iTunes music store, a uk court has ruled, rejecting a lawsuit filed by Apple Corps -- the company responsible for the Beatles' commercial interests. Apple Corps had claimed that the computer company had broken a 1991 agreement in which each agreed not to enter into the other's field. However, the court ruled that the Apple logo was used in association with the store, not the music, and thus was not a breach. Apple's lawyers had argued that users of iTunes music service are able to tell the difference between the logos. Apple Corps uses a green apple as its logo, while Apple Computer has a cartoon-like apple with a bite taken out.

Meanwhile, bbc had to apologise after a goof-up over an interview on the judgment. The network had invited Guy Kewney to discuss the matter. But Internet music downloads expert had to cool his heels in a chilly reception hall while correspondent Karen Bowerman interviewed a mysterious man -- ostensibly Kewney. The mystery man turned out to be Guy Goma, a Congolese man who had applied for a job with bbc and had followed Bowerman into the room.