Offspring of GM organisms are unable to survive till adulthood 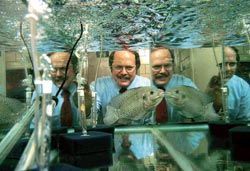 researchers from the us-based Purdue University have discovered a paradox that could crop up if genetically modified (gm) fish are released into the wild. While gm fish are bigger and have more success at attracting mates, they produce offspring that are less likely to reach to adulthood, the researcher found. "Our findings are crucial. Plenty of laboratories are studying whether transgenic organisms are safe for human consumption or not, but no one is assessing the safety for the environment," says Rick Howard, the lead researcher.

As a step towards resolving this issue, Howard and his colleagues examined the Japanese medaka, a small fish that reproduces often, and therefore its trends over the generations emerge quickly. The researchers took several tanks and put a female medaka into each one with two male fish -- one natural, the other transgenic. Howard found that the transgenic males mated three times more than the natural-bred fish. But the higher breeding levels of the transgenic males did not prevent the overall population of the medakas from declining -- for every 100 offspring sired by a natural male that survived till adulthood, only 70 of the young produced by a transgenic male could do so.